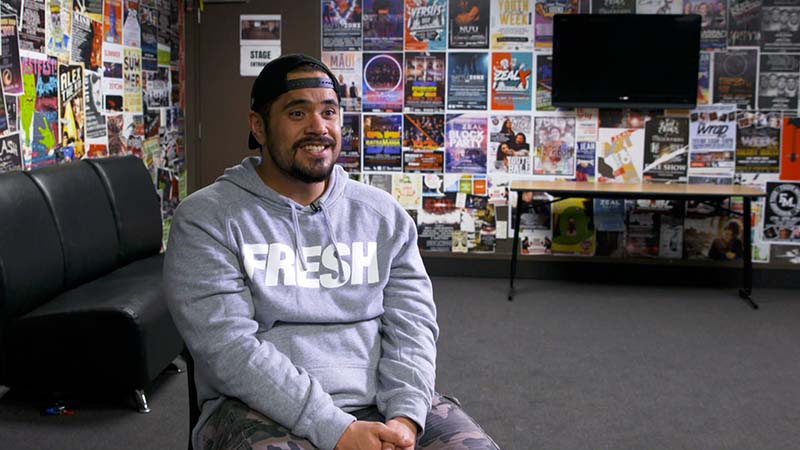 It’s after school and the Zeal youth centre in Henderson is pumping. Students from the local schools arrive to play basketball, cards, table tennis, dance and drama just to name a few of the free activities.

Hadleigh Pouesi is the manager of the West Auckland branch, a role that allows him to work directly with youth.

“I was taught that idle hands create mischief and so if we can keep young people occupied through positive engagement we feel that we would be able to prevent them from having to do other things that we are seeing in the media.”

This is a safe space where youth workers are trained to journey with young people to overcome the tough stuff.

For the last two years local boy Titus Meleisea has been visiting Zeal to relax and meet new friends over a friendly game of basketball.

Hadleigh is now in his 30s and understands the challenges these young people face as he grew up in the same neighbourhood.

“As a young person I saw myself maybe heading into a bit of a trajectory that wasn’t one of success and it was crossing paths with some youth workers that really put me on a straight arrow,” Pouesi says.

“My goal as a youth worker is now to be that for them so, to be somebody, an older person, an older role model, who can serve as a bit of a big brother.”

A big brother who is always on hand to help, no matter what.

“It’s not a job, it’s a lifestyle for sure; nine to five doesn’t really do what we do, justice. If a young person is in crisis at 3am then we are on, if there’s a family that needs support no matter what time, day or night, we are the ones that a lot of these people call,” Pouesi says.

His passion for the community began from his love of dance.

“I got an opportunity to be in a dance crew with some of my really close friends we called that dance crew, Sweet and Sour and we were afforded the opportunity to go and represent New Zealand at the world champions in 2008,” he says.

Winning gold with his crew, opened up opportunities for Hadleigh to dance around the world fusing Pacific, Māori, Hip-hop and contemporary dance.

He has worked tirelessly on the competitive dance and choreography scene for the last 18 years.

“It got to a point where it was like, hey you know what I think this is me. I think I’ve ticked off everything that I need to do in my bucket list,” he says

Fresh Movement has toured the USA, Australia and the Pacific showcasing new talent and creating work for hundreds of young performers.

Now their latest project Māui involves movement, music and spoken word to bring to life the story of the Pacific demigod on stage at the prestigious Kiri Te Kanawa theatre in Auckland.

“I think we learn about Māui being a Māori character but you do a little bit of research, Māui has his footprints throughout all of the Pacific.” he says.

“And so we thought if we were going to celebrate us being people of  Te-Moana-Nui-a-Kiwa let’s celebrate the Pacific super hero that is Māui.”

The show is part of the Matariki celebration this year and Hadleigh says it’s important to acknowledge the similarities of our cultures.

The work first premiered at the Auckland Fringe festival in 2019 and has evolved over the years. Now it’s about spreading the tale far and wide.

Pouesi says, “I am so proud of all of our cast, I am also proud of the work and how that has grown from venue to venue that we’ve gone to and you know what i think it’s ready to go out to the world.”