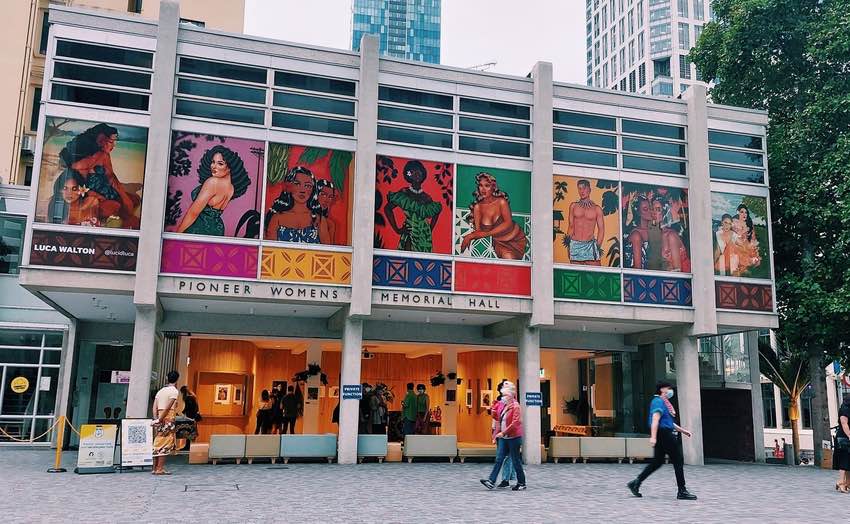 The Ellen Melville Centre in the heart of Central Auckland is sporting a new Pasifika look over the next few months.

Set off High Street and Freyburg square, the community centre is currently showcasing the artwork of Pacific Islands graphic digital artists Luca Walton and Tai Nimo on its exterior.

Luca, whose mother is Tongan, says this opportunity emerged out of the Covid situation in early March, in the wake of the uncertainty, changes or cancellations to Polyfest, fiafia nights, and the Auckland Pasifika Festival.

“As a result, the Ellen Melville Centre honoured us with an opportunity to put on a visual experience that people could enjoy safely, that was colourful and richly inspired by our heritage,” Luca says.

Both Luca and Tai were absolutely over the moon to see their work in person, finding the experience ‘quite shocking’.

“I don’t think I realised until I turned up to see it for myself the sheer scale of it all,” he says.

“Of course, it’s always been my goal to put Pasifika beauty in the spotlight, you really can’t miss it if you are walking by, it’s just surreal.”

On the opening night last month, Tai invited her father and grandfather into the city to see the artwork.

“My father told me his entire face lit up when he saw the artwork and my name,” she says.

“My grandfather said ‘that’s my father’s name’ in reference to the surname Nimo. I feel proud to be able to honour my own family roots and others who came before me to pave a way for our Pasifika people today.”

Both artists say the showcase has meant so much to them as Pasifika artists and that their works are being recognised as meaningful and relevant. They also added that the subject matter of ‘Pasifika women’ needed to be celebrated and deserved to be shown on such a large scale.

Luca says he drew inspiration for his art from the strong Pasifika women in his life, especially from his softly spoken mother and ‘my three older sisters, who all hail from different island nations’.

Tai chose to focus her artwork on depicting “generational love”. This can be seen with the four female portraits facing the square.

“I illustrated my mother, sisters, and myself. My mother is half Cook Island and Palagi, so I wanted to honour our Cook Island roots and the element of feminine beauty,” she says.

“My other artworks on High St are self-portraits which reflect the contemporary balance of Afakasi identity.”

Luca says it’s been “really cool” seeing people excited and even emotional at seeing the representation of themselves at that scale and that he couldn’t have asked for a better reaction.

“Surreal is the word that keeps coming up for me at the moment; again I really didn’t consider the scale of the building whilst we were making progress in this project, not until it was installed.

“I also feel a lot of gratitude, I couldn’t have made this happen by myself, it definitely took a village,” he says.

Tai feels the whole showcase has been beautiful and surreal.

“I am so honoured to be working alongside Luca and being able to represent our Pacific heritage for all to see.

“I still can’t get my head around seeing our artworks in the centre of town. I’m very grateful for the team at the Ellen Melville Centre, so proud of our artworks.” Tai says.

You can find the Artwork at The Ellen Melville Centre, 2 Freyberg Place, Auckland CBD. They’ll remain in place until the end of May

To keep up to date with Tai and Luca’s art journey, you can follow their personal accounts below:

Make learning fun again: Educators look forward to finally getting out of the classroom