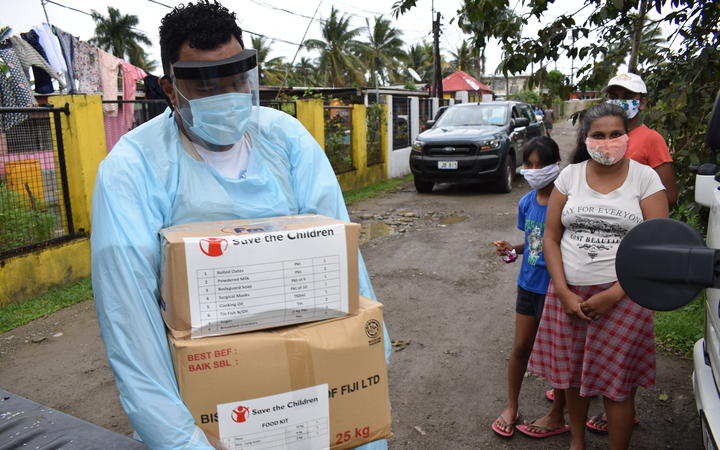 By Eleisha Foon, Journalist for RNZ

Basic humanitarian needs are going unmet in Fiji say charities trying to provide food for Fijians caught up in the country’s health and humanitarian crisis.

Thousands of food packs have been distributed across the nation by non-government organisations since the second wave outbreak began in April. But, as the situation worsens, many families in quarantine areas have been living hand to mouth, and the organisations are calling for more donations.

Just one meal a day was the reality for some in remote areas, as the country continued to grapple with a worsening health crisis, said Sashi Kiran, the director of Friend (the Foundation for Rural Integrated Enterprises and Development).

And some of Fiji’s most vulnerable, like the elderly and disabled had been missing out on vital food packs.

“There are some cases where people are basically living off leftovers from their neighbours. That’s all they were eating,” Kiran said.

People were desperate to get their hands on food to feed their families, and many were now unemployed and isolating at home she said.

“We have seen an increase in requests in Nadi, but Suva in particular has extremely high demand. Some families are hard to find because there’s no addresses, no house numbers.

“There are people falling through the gaps. There always will be.”

An urgent meeting was called this week with the Fijian government, United Nations and social services to improve the nation-wide food distribution plan.

Fiji Council of Social Services representative Vani Catanasiga said they had delivered close to 10,000 food packs since the crisis began in April.

But accessibility was a major problem for people living in remote areas.

“Our concern is that there [should be] co-ordination so people are not having to break quarantine measures looking for food,” she said.

“We think that’s where the problem has been, with co-ordination.”

She hoped the organisations would be able to organise together to avoid doubling up in providing food to some areas.

Covid-19 has been spreading rapidly in the Central and Western division near Suva, putting pressure on an already stretched health system.

Save the Children New Zealand raised $170,000 to provide more than 2000 Fijian families with two weeks of essential groceries, including food basics, baby products, sanitiser, and masks.

But the organisation’s chief executive for Fiji, Sharaina Ali, said they had a waitlist of more than 2000 more requests, including from pregnant women and mothers needing nappies and baby formula.

Some mothers had turned to feeding their babies sugar water out of desperation because they were unable to afford formula, and were unable to feed everyone in their household, she said.

“In terms of food security – people being able to provide for their families – that’s the major issue right now. If you have funds to spare, please do support families in Fiji who [www.savethechildren.org.nz really need support right now]”.

The Fijian government has offered a monthly allowance of $120 for 6 months, which will be paid in two lump-sum payments, but Ms Kiran said it won’t suffice.

NGOs like Save the Children are reporting they need all the financial support they can get, and called on New Zealanders to donate so they could keep distributing food packs to help Fijians struggling to survive.

The Fijian government has announced an unemployment allowance of $120 a month (NZ$175) for six months for those affected by the pandemic, that is to be paid in two lump sums from August. But Kiran said that was not enough to get by on.

“You know $120 is really not enough for fuel, medication and food.” She expected the payment would likely only cover a week’s worth of food bills for a family.