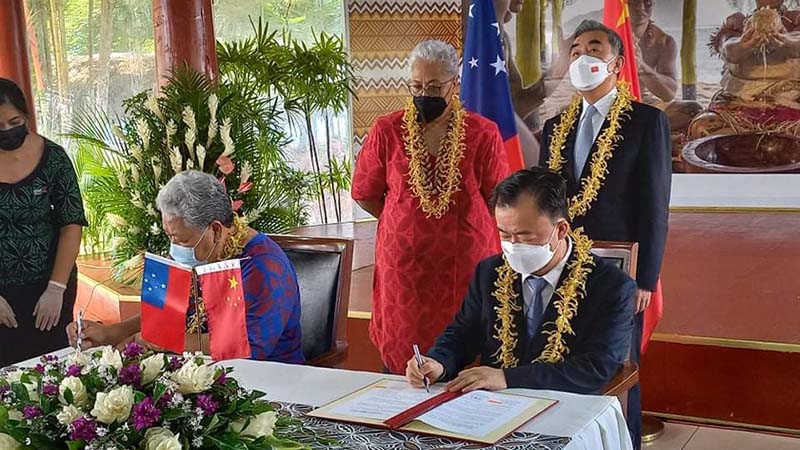 A joint Samoa and China Government press release said the meeting covered issues such as climate change, the pandemic and peace and security.

The release stated that, “China is a key development partner for Samoa providing infrastructural developments in the health, education and public administration sectors, human resource development, sports development and technical cooperation in the agriculture sector. Key to the bilateral relations between China and Samoa is the adherence to the one China principle.”

Also attending the meeting in the China delegation was senior officials from the Ministry of Foreign Affairs, Ministry of Commerce and the China International Development Cooperation Agency (CIDCA).

After the meeting,  both Fiame and Wang Yi both signed Agreements including the Economic & Technical Cooperation Agreement for projects to be determined and mutually agreed between the respective Countries.

There was also the signing of “The Handover Certificate for  the completed Arts & Culture Centre and the Samoa –China Friendship Park.  Both parties also signed off an agreement to help Police set up a fingerprint lab for police investigations  and construction of the Police Academy.

The bilateral meeting was held in the open Fale of Samoa Tourism (STA) as a covid safety measure.

China’s Foreign Minister also visited the Solomon Islands and Kiribati on the weekend and is expected to be in Fiji today.  Other countries they will visit include Tonga, Vanuatu, Papua New Guinea and East Timor.  Leaked documents reveal a proposal for a region-wide deal covering issues such as Policing, Security and Communications cooperation.

Watch the signing below:

‘60 years on, we have seen Samoa, our country, develop’ – Samoan matai reflects on independence