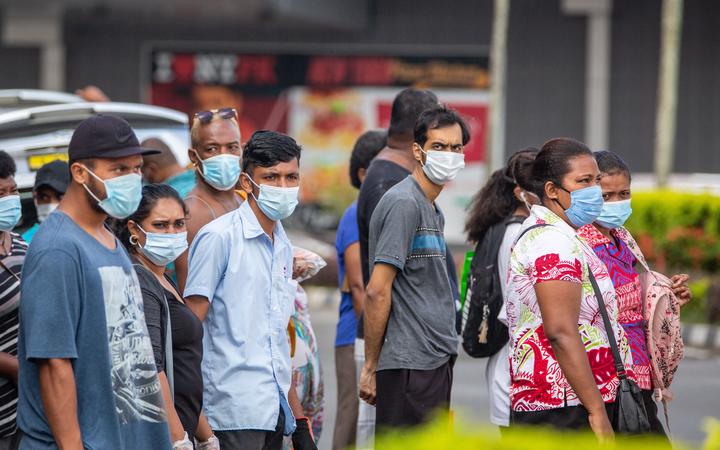 Fiji has recorded 873 new cases of Covid-19 and three more deaths, including a 15-year-old girl, in the 24 hours ending at 8am on Monday.

That compares to 485 cases and three deaths in the previous 24-hour period.

The Health Ministry announced that all six patients were unvaccinated.

Health Secretary Dr James Fong said five other people who tested positive for Covid-19 had died but their deaths have been attributed to “serious pre-existing medical conditions and not Covid-19.”

Fiji has 9310 active cases in isolation. There have been 58 deaths reported, 56 of them are from the latest outbreak that began in April.

A 56-year-old woman from Vatuwaqa in Suva died at home. Her family reported that she had been feeling unwell for a week.

Dr Fong said the second victim was an 87-year-old woman from Nasinu who had presented to the FEMAT (Fiji Emergency Medical Assistance Team) field hospital in severe respiratory distress.

“Her condition worsened at the field hospital and she died two days after admission. Her family reported that she was feeling unwell with cough and fever prior to her presentation.”

Dr Fong said the case that was previously under investigation, the teenager, was now classified as a Covid-19-related death.

“This is a 15-year-old from Colo-i-Suva who was declared dead on arrival by the attending medical officer at the Raiwaqa Health Centre. This means that she either died at home or on her way to the health facility.

“Her family reported that she had been feeling unwell for two days. Her symptoms included a cough, shortness of breath and chest pain. She was not in the target population of people 18 years and over that are eligible to receive the vaccine.”

Dr Fong said 60.2 percent of the target population had received at least one dose and 11.4 percent were now fully vaccinated.

The seven-day average of new cases per day is 696 cases or 787 cases per million population per day.

The ministry stated the Valelevu Health Centre was being prepared for the resumption of medical services later tonight.

Medical services can now be accessed at the Makoi Health Centre, and screening clinic services continued at the National Youth Centre in Valelevu, a ministry statement said.

“For the Naulu Nursing Station, members of the public will be informed when medical services resume.

“For now, medical services can be accessed at the Nausori Special School; and screening clinic services will continue at the Naulu Screening Clinic.”

For the Samabula Health Centre, preparations were being made to have services resume tomorrow.

The ministry stated that medical services could be accessed at the Raiwaqa Health Centre with emergency services available at Colonial War Memorial (CWM) Hospital and the FEMAT field hospital at the Vodafone Arena in Suva.

Screening clinic will continue at the Samabula Primary School, with the entrance via the back gate from Fulaga St.

Covid-19 crisis in Fiji by the numbers

Abuse in care inquiry: Public hearing to shine a spotlight on Pacific survivors