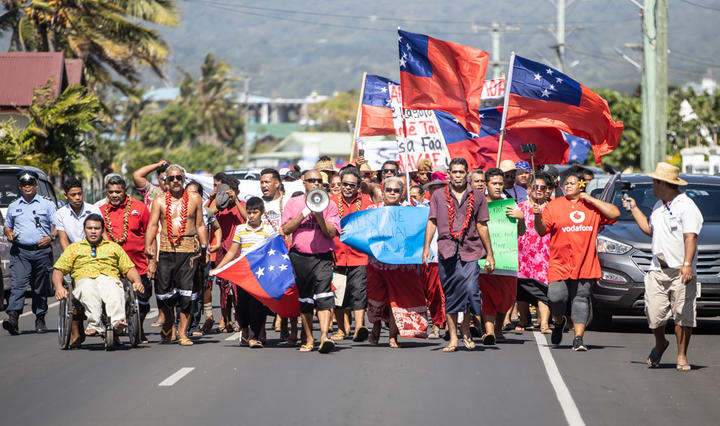 More than 500 people are estimated to have taken part in a march in support of the Samoan Judiciary and calling for an end to the current political stand-off between two political parties.

The Samoa Observer reports the march was organised by So’o’au Va’a and Maylynn Brown and included some members of the Returned Servicemen’s Association (RSA) carrying flags of New Zealand, Australia and the United States to represent the Samoan diaspora in those countries. The Samoan flag was prominent on the rally. An Israeli flag was also spotted.

Placards read “No one is above the law” and “We stand for the Judiciary of Samoa”.

One RSA member Peter Jensen said the current situation seems like a ball game between two teams trying to score points against each other.

“Samoa needs a Government; we’ve got to have a united Samoa,” he said.

“We just hope that someone will see the light,” he said.

She said the ordinary people of Samoa were sandwiched between interest of the two main political parties.

She said this is what spurred a thought “that we needed to rise, we needed to voice our thoughts, to tell those at the top that we have rights”.

The organisers said that the march was not in support of any political party but was in support of FAST leader Fiame Naomi Mata’afa as the first ‘Samoan female Prime Minister’.