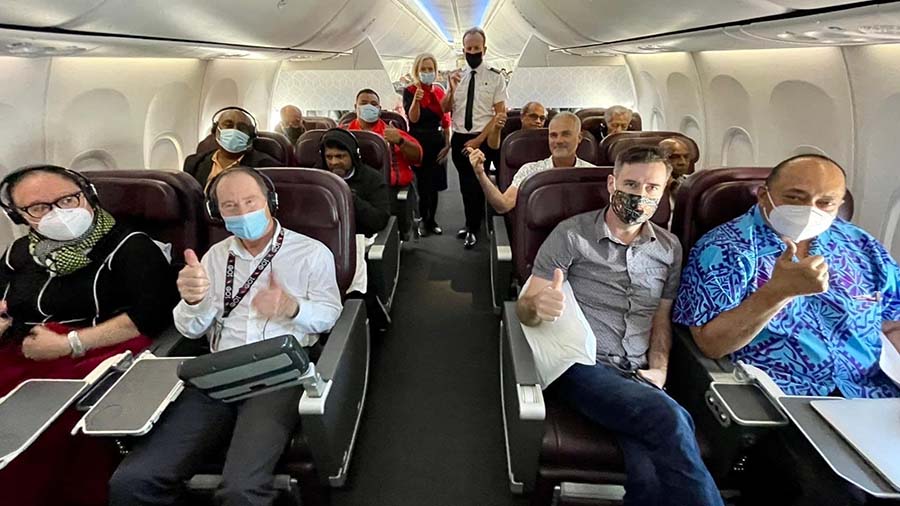 Pacific leaders and delegates head to Palau for Our Ocean conference

A Tonga delegation led by Prime Minister Hu’akavameiliku Siaosi Sovaleni heading to the ‘Our Ocean Conference’ in Palau this week.

The conference, jointly hosted by the Republic of Palau and the United States, was founded by former US Secretary of State John Kerry, and will be the first time it is hosted by a small island state in the Pacific.

The conference gives Pacific nations an opportunity to discuss partnerships and ensure the ocean is sustainably managed for resources and livelihoods.

Prime Minister Hu’akavameiliku says that over 90 percent of Tonga is ocean and, “that kind of resource needs to be managed properly.”

“Having a regional approach…to how we actually use the ocean in a sustainable manner – that’s hopefully what we are going to come out with from this particular conference,” he says.

“A better managed ocean that actually can help, not just economically, but also [help] our efforts with climate change.”

The Tonga Ocean 7 committee was tasked with putting together the Tonga Ocean Plan. And in the past five years, the Kingdom has focused on Marine Protected Areas as part of this plan.

But with climate change’s ever growing presence and the threat of illegal fishing, Hu’akavameiliku wants to use the conference to also address these issues.

“We are in partnership with NZ and Australia about getting those patrol boats, not necessarily just security, but also illegal fishing because it actually has some impact on our economic side of things.”

This marks Hu’akavameiliku’s first trip overseas as Tonga’s PM, and he will also be joined by New Zealand’s Minister for Pacific Peoples, Aupito Su’a William Sio.

“I hope that we can demonstrate Pacific leadership on ocean conservation, but also reconnect with many of our Pacific partners after a long period of COVID-19 disruption,” Aupito says.

“The Pacific is central to the lives, cultures and well-being of Aotearoa and our Pacific whānau. At the ‘Our Ocean Conference’, I will be encouraging progress on issues such as the conservation of marine environments and sustainable use of ocean resources.”

Around 61 countries are expected to be part in the conference with a focus on six Areas of Action: marine protected areas for communities, ecosystems and climate; tackling marine pollution; confronting the ocean-climate crisis; creating sustainable blue economies; advancing sustainable small-scale fisheries and aquaculture; and achieving a safe, just and secure ocean.

“The ocean as a pathway for our enduring connection with the Pacific is central to Tātai Hono, the recognition of deep and enduring whakapapa connections,” says Aupito.