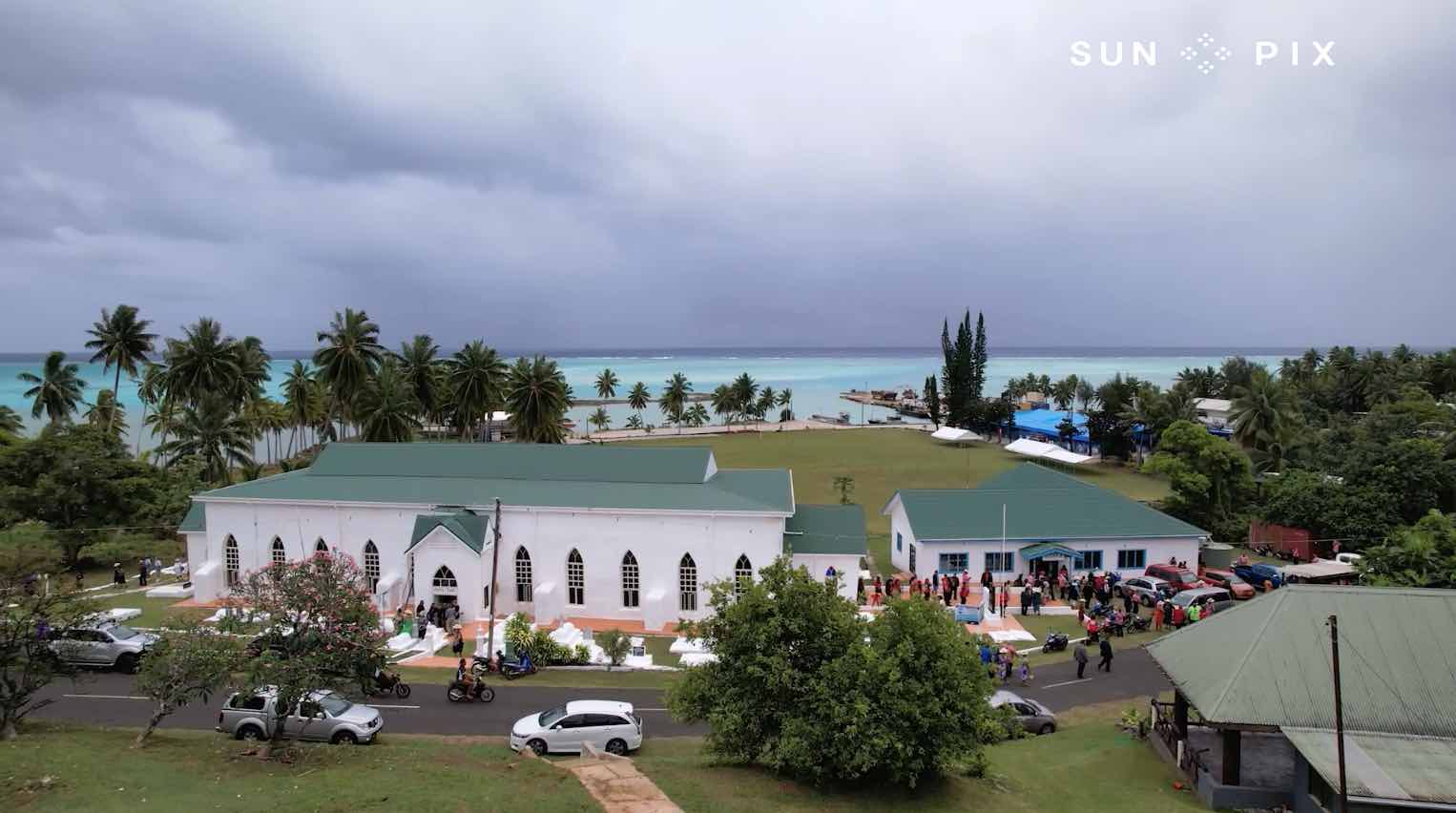 Last month the island of Aitutaki held a special commemoration celebration: the 200th anniversary of the arrival of Christianity to the Cook Islands.

Despite Covid causing havoc with the travel plans of many expected overseas guests, especially from Aotearoa, the event continued as planned.

October the 26th 2021, a dawn ceremony is taking place on the Arutanga foreshore in Aitutaki.

Bearers, carry a symbolic carved bible high on an ‘ata to mark the moment 200 years ago that the gospel arrived to these shores.

Among the bearers is Arerau Maao Jnr, who’s known as the ‘Putokotoko o Tamatoa Ariki’ or the right-hand of the Ariki Tamatoa.

“Right where I am standing right now, where the passage is on my left, that is where the gospel first arrived, and it arrived at the beautiful island of Aitutaki.

“Aitutaki is the very first island to receive Christianity in the whole of the Cook Islands, and it was accepted by the chief Tamatoa,” Maao says.

Celebrations start well before dawn on this day as the island is woken by the sound of beating drums. As the ‘ata makes its way to its destination in Orongo Park, locals join ‘aronga-mana’ traditional leaders and other church and government dignitaries to unveil the Bicentennial Commemorative Stone.

“The people in Aitutaki [have] been looking forward for this special occasion since many years, and today we are glad to say that not only Aitutaki has come together for this celebration but all the Pa-Enua, the different islands in the Cook Islands, from the northern group right down to the southern group.”

Christianity’s played a huge part in the lives of the people here for two centuries. And in October 1821, it was the Reverend John Williams from the London Missionary Society (LMS) who arrived at these shores accompanied by two Tahitian Christian converts, Papehia and Vahapata.

Embraced by the high chief Tamatoa Ariki, Williams left the two Tahitians to teach the gospel while he continued his on journey. When he returned to Aitutaki nearly two years later, the conversion to Christianity was almost complete.

“If the Ariki did not accept it, we would not have Christianity or the Gospel here in the Cook Islands.”

Two hundred years on, it’s a much different Aitutaki but a community nevertheless that’s proud of its Christian heritage. And helping people here celebrate are Cook Islanders from neighbouring islands or pa Enua.

“It’s very historical for us, and we’re very honoured to come from Rarotonga, although most of us are from Aitutaki as well,” says Margharet Matenga from the Titikaveka CICC Church.

“We’re very happy to be here to witness these celebrations this year.”

Rarotonga Identity George George was happy to be back in his hometown.

“I guess (it’s) one for the archives for me. But certainly to be back where I grew up as a young kid, I was banking on being part of these celebrations for a while, and you know, a 200-year bicentennial celebration doesn’t come too often.”

Years of planning and fundraising’s gone into this celebration, which is tinged with some sadness for locals. Border closures due to Covid meant many overseas Cook Islanders and fellow Christians could not attend. For some though, it was a blessing in disguise.

“Yes, we are all sad. We really feel sorry for them. We only hope they can make it here,” says Mama Kairangi Henry.

“I’m sure most of them are crying, wishing they’re here to celebrate together with us, but we can’t help,” says Mama Teuira Tearetoa.

“A lot of our families from Aotearoa and Australia can’t be here. But thank goodness to modern technology, we are able to share images and audio with our family and friends right around the globe,” says Nick Henry from the organising committee.

“It turned out to be a blessing for us that the border wasn’t open not in a… I don’t want to say that in a negative way,” says Are Taunga representative Teina Bishop.

“But I don’t think we would have coped if tourism was here. It’s hard enough to cater for the people that came from within our country.”

Aitutaki was the first to welcome the gospel to the Cook Islands. The LMS missionaries would reach neighbouring islands including Rarotonga in 1823. Plans are already afoot to mark the event on those islands in two years.

For many on Aitutaki, this event has helped re-affirm their Christian faith but also, that it can’t be taken for granted.

“What will happen in the next 100 years? Will there be another celebration like what we are having today?” says Pastor Taamo.

“Will our relationships in Christianity be 100% in the future, or will it be a hardship for the people of Aitutaki and the Cook Islands?”

“I believe we need to be on track with God again,” says Pastor Aratai.

“Somewhere along the line we’re starting to let go of Christianity, let go of God, and we’re seeing the things that people are facing.

“What we need now is to be on track with God, build that relationship with God and be ready for God when his son Jesus will come and take us back to heaven.”