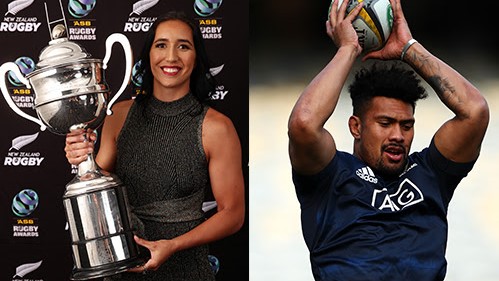 Ardie Savea collected three awards at this year’s ASB Rugby Awards in Auckland last night, including the supreme Kelvin R Tremain Memorial award for the overall Player of the Year, bookending a year of consistently remarkable performances from the All Blacks and Hurricanes loose forward.

Savea reached a new level of play in 2019, starting eight of the All Blacks 10 Test matches, and he showed strength and versatility across the back row.  Savea was a monster presence on the field in attack – often taking defenders for a ride – and on defence – he displayed a freakish ability to turnover crucial ball at the breakdown.

In another night for the history books, Black Ferns Sevens captain Sarah Hirini won the Tom French Cup for Māori Player of the Year, the first woman to do so in the 70-year history of the award.

New Zealand Rugby Chair Brent Impey congratulated all award winners. “It has been a wonderful and successful year right across rugby. It has been a remarkable year again for the Black Ferns Sevens and the Crusaders who have won coach and team awards.

“I am delighted that 70 years after the Maori Player of the Year award was first presented in 1949 to Johnny Smith of North Auckland, Sarah Hirini becomes the first woman to lift the Tom French Cup. She is a player whose strength and leadership on the field, make her an appropriate winner of this award.

“As for Ardie, what an absolute pleasure he has been to watch this year.  Both as a Hurricane and an All Black, this young man has been in sublime form and we hope to see much more of him next year.”

Samoa measles epidemic: No deaths in the last 24 hours