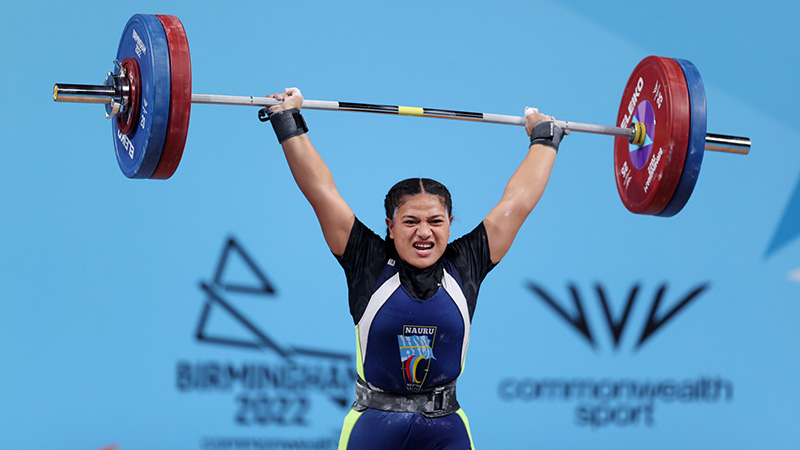 19-year-old Maximina Uepa has lifted her way to the Commonwealth podium, winning bronze in the Women’s 76 kg division.

It was an emotional moment for the Nauru teenager who dedicated the win to her mother, Reanna Solomon.

Speaking to Ali Iverson of Inside Games, Maximina says, it was so sad.

“I would like to dedicate my medal to her memory.”

When COVID had finally reached the shores of Nauru earlier this year, half of the country’s population had tested positive.

She remains Nauru’s only female Commonwealth gold medallist, winning in both super-heavyweight clean and jerk in total during the 2002 Manchester Commonwealth Games. Reanna also won the bronze medal in the snatch division.

Now, Maximina has followed her mother’s footsteps, something which former weightlifter and Nauru president Marcus Stephen is proud of. “Reanna set the standard for our female lifters to follow.

I’m very pleased with Maximina and her dedication to Reanna,” says Marcus.

Marcus was the country’s first gold medallist at a major games, increasing the popularity of the sport in the island nation.

He was in Birmingham to watch the Nauru team compete, and acknowledged the toll which the pandemic had on the athletes training.

“Restrictions came in recently and that meant we missed three weeks of training for these Games.”

Maximina has continued the country’s weightlifting success record, securing her bronze medal by lifting a total of 215kg’s.