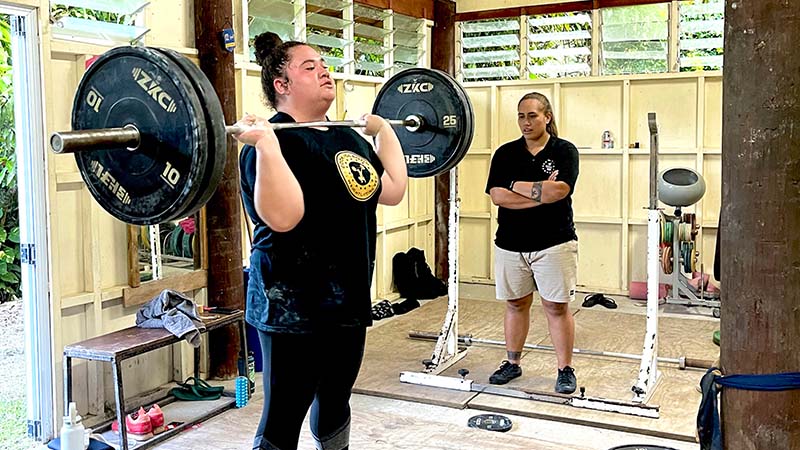 The sport of weightlifting in the Cook Islands has recently seen a drop in participation numbers, but two-time Olympian Luisa Peters thinks she’s found the next crop of athletes to move the sport forward.

“In 2018 we had one lifter, which was myself,” says Peter who is now vice president of the Cook Islands Weightlifting Federation.

This next group of athletes includes Manine Lynch who punched her ticket to this year’s Commonwealth Games in Birmingham by winning the New Zealand International competition in February.

“Coming off the platform after my last lift, Martin our manager said ‘oh you won gold’.”

Lynch, 23, won New Zealand Secondary School titles as a student at Epsom Girls Grammar. She only returned to the sport competitively in October 2021 following a five-year break.

“Being away from weightlifting for so long, it really gave me a chance to grow into my identity and now I’m more grounded in who I am, and I’ve become mentally stronger after those five years,” says Lynch.

Now that she has qualified for Birmingham, both coach and athlete know what’s expected of them over the next few months.

“The Commonwealth Games is the second biggest sporting event underneath the Olympic Games for us and she’s going to compete in front of thousands and millions will be watching,” Peters says.

“If your physical game is good but not your mental game, that’s where things can go wrong, so she’s got a lot of work to do.”

“I think the best thing for me would probably just be as healthy as I can, make sure that I’m injury-free and luckily you know we’ve got resources here that can help me with that.”

Peters also beamingly discusses the progress of Jerome Tura and Briseis Crighton as the other two athletes alongside Lynch to take Cook Islands weightlifting into the future.

Tura won a bronze medal in the men’s under 81kg weight class at the New Zealand International alongside Lynch, lifting 110kg snatch and a 140kg clean and jerk for a total of 250kg.

“Jerome had to come down a bodyweight class and for him to produce the results he did in Auckland is amazing – it’s not because he’s strong but more that his mental game was stronger than his physical, which got him through,” says Peters.

Coach Peters is especially impressed with fourteen-year-old Briseis, who is also autistic.

“She started with me when she was only twelve and when she came you know we couldn’t get a word out of her,” Peters recalls.

“She was very shy, but a year and a bit later, she’s this whole new different person, she talks to everyone and I think the sport has helped her come out of her shell.”

Resourcing and financial backing will go a long way to helping raise the profile of weightlifting in the Cook Islands, but Peters says they also need more athletes and education around the sport.

“Our parents here in the Cook Islands have this thing you know girls shouldn’t be lifting this or that sport is too dangerous so I think it’s just educating our people on the sport and that will help us to move forward.”