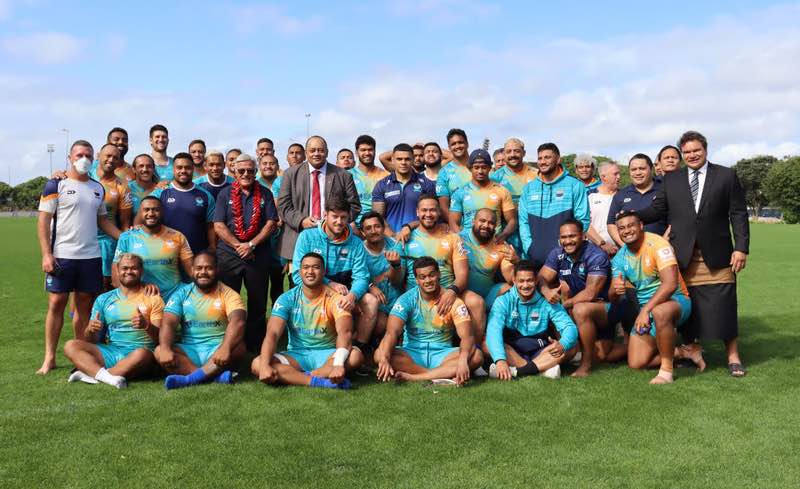 The Prime Minister thanked the players and commended the team for the support shown after the volcanic eruption of January 15th with the fund-raising efforts of Ofa Atu Tonga.

“I would like to thank Moana Pasifika, the rugby team and the organisation, for helping Tonga in their time of need. You have done an outstanding job, and I wanted to congratulate you on what you have done.”

“For all those who supported the [Ofa Atu Tonga] relief fund organised by Moana Pasifika, malo. That contribution has gone a long way in helping us. It was very much appreciated, and I wanted to thank you in person.”

Moana Pasifika Trust chair Laauli Savea Sir Michael Jones spoke of the honour of having Prime Minister Sovaleni significantly ahead of the players’ first journey out of the country.

“You are our first Prime Minister on our whenua, our first dignitary we have hosted. It means a lot to us, our wonderful family and coaches, and our players to have this visit, especially as we travel and to have this blessing.”

Of the 38 contracted Moana Pasifika players, 14 are Tongan and 7 are ‘Ikale Tahi players eligible to play for Tonga.

A new collaborative initiative, #TongaStrong, was announced on April 15th by Moana Pasifika and principle team sponsor EarthX to support the rebuild and resilience of Tonga.

This campaign will support the rebuild of sustainable and equitable infrastructure that will withstand future environmental challenges. Funds raised through #TongaStrong will go to support Habitat for Humanity New Zealand’s ongoing work in Tonga.