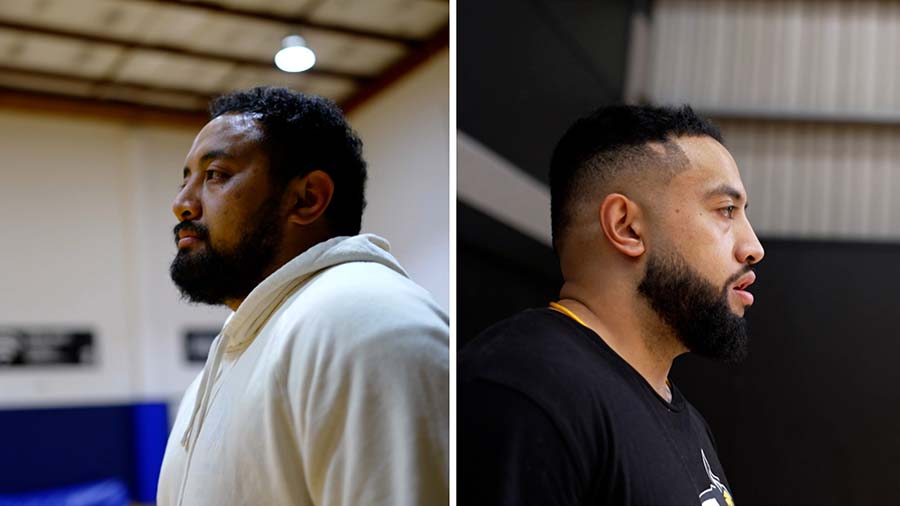 “We started at a high school level and no one kind of knew us. Now we are kind of like professional level, almost the pinnacle of New Zealand club basketball and we are fierce rivals,” Josiah says.

The Bulls and Tuatara are set to play each other twice during this year’s NBL season, an opportunity for the cross-town opponents to claim the title of best in Auckland.

But Sione says it’s only a friendly competition between him and his older bro.

“We haven’t really spoken tactic-wise, but we talked about the teams, how we are shaping up, you know whose team is better than who,” Sione jokes.

They first got into the sport back in high school when Josiah switched from playing rugby to basketball.

“Rugby training was cancelled and I had to wait for mum to pick us up so waited in the gym and the basketball coach thought I was trialling so he chucked me in the trial bare feet.

“I kind of fell in love with the sport since then.”

The brothers enjoyed the game so much they decided to try out coaching.

Sione says, “I just fell in love with coaching, with the tactical side of things; building relationships and I think, the way our mother raised us was to always help people regardless of what we had and what we didn’t have.”

“And coaching was a way for us to give back to the community.”

And that’s exactly what they did in 2017, co-founding ‘GI Rise’, “when we became coaches, we really wanted to open up that space to kids who are passionate about basketball but couldn’t afford that space as well,” Josiah says.

Athletes from all playing levels and from all over Auckland travel to Glen Innes to be trained by the pair. Others have come as far as Melbourne and even the US.

As assistant coach of the Franklin Bulls, Sione is proud to see more Pasifika take up the sport.

“We have in our group of players Samoan boys, we have Māori boys, we have Tongan and I think it’s shown how far basketball has grown in the Pasifika community,” he says.

And the players agree. Franklin Bulls Forward Leon Henry says, “to get assistant coaching roles in our top league just further shows how passionate they are.”

“Especially giving back to our Pasifika and Māori kids, [and] just to kids in general, their doors are always open and I’m excited to see their venture in this space and professional sport.”

“I’ve had a few island coaches growing up but at this level you honestly don’t see too many of them, it’s awesome to have a guy like Sione around who ultimately helped me with my journey,” he says.

“Just to have people from my culture and people that understand where I’m from and our back story, it kind of takes a bit of weight off my back,” Passi says.

‘Something needs to be done’ : Samoan social entrepreneur animates Pacific languages for kids

Talanoa: the Pacific members serving in our armed forces