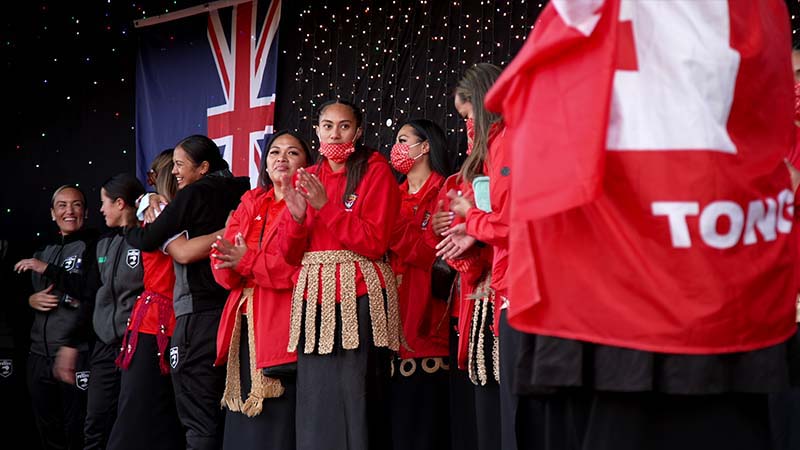 The fans and the Tongan Culture are a big part of what Mate Ma’a Tonga is all about.

It’s been two years since Mate Ma’a Tonga (MMT) last played in Auckland and the fans know it.

“It feels great to be among the crowd,” one fan says.

“It’s been over two years now since we last gathered together and it’s very humbling to be here.”

Another who had travelled over from Sydney was loving the atmosphere.

“This is my first time experiencing something like this in Auckland, I’m used to seeing everything on social media and I’ve always wanted to come & experience it.”

The fans were at the Otahuhu Rugby League club on Wednesday, standing by to meet the MMT men’s team as well as the Tongan women’s team. 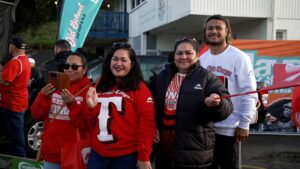 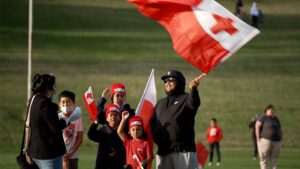 The MMT women will play the Kiwi Ferns in the curtain-raiser to the men’s match and there’s plenty of excitement among the players.

“We went into Monday coming in knowing there was going to be fresh faces, new experiences and so yeah I’m enjoying the journey right now,” says player Noia Fotu-Moana.

And watching the MMT fans rally behind their team on Wednesday was Kiwi Ferns captain Krystal Rota.

“It’s really exciting and like, you know, there’s not too many Kiwi fans out there and I really respect that and their passion for their nation, but it just brings excitement faster.”

Of course, the Tongan’s men’s team is stacked with NRL stars, and they will face off against an equally star-studded Kiwis team. There’s huge anticipation for that match as the last time the two sides met in 2019, the kiwis won 34-14.

“Boys trained yesterday and today, and they look pretty good considering we’ve only had a short time to prepare, [I’m] really looking forward to this weekend.”

“We’ve been away for two years, two years too long and a lot of our team are young boys,” he says.

“It’s great for them to experience and it’s just great for us to be back and have all our supporters come out and support us.”

And a big part of the MMT organisation is the Tongan culture, with many of the players residing overseas, it’s important to re-connect them with their Tongan roots whenever possible, says Exeter Alofi, MMT’s New Zealand chairman.

“When we say Mate Ma’a Tonga, it’s who we are. It’s who we are culturally, and our identity and everything about us,” he says.

“So we wanted to bring that aspect to the campaign and make sure that we deliver – and make sure it’s authentic and we respect the cultural part of, you know, the team. That also resonates with the players.”