HomeSportsTuivasa-Sheck keen to make the most of All Blacks opportunity 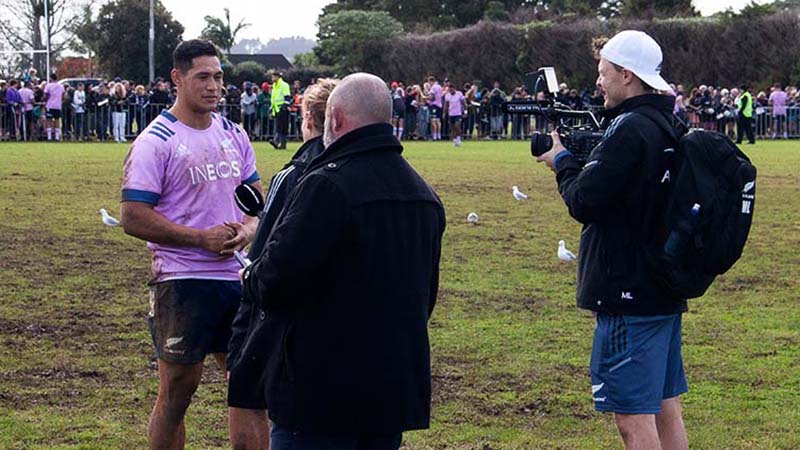 “Yeah, it’s crazy to be here at the All Blacks you know; it’s unreal and just looking forward to making that debut and running out there with the proper fern on my chest,” he says.

Just a year after making the switch from rugby league, he’s in the All Blacks fold and getting to know his new team-mates at the squad’s first hit-out together in the Northland town of Kerikeri.

“A few awkward hi, hey guys, my name is this and that but now that we’re on the field, we’re going to work with each other; we’re creating bonds and relationships here on the field and that’ll easily translate into the off-field.”

For many, it’s no surprise to see Tuivasa-Sheck here. A Kiwis rugby league international and Dally M medal winner in the NRL, his class shone through for the Blues in Super Rugby Pacific this year. And ever the professional, he’s focused on soaking up as much as he can, in Black.

“All you want to focus on is just doing your job so that’s all I’m just trying to do, is make sure I’m in the right place at the right time,” he says.

“These guys work at (being) the best of the best so they expect that, they expect you to be the best at your game, because the All Blacks brand, it’s the best on the world.”

And having 12 Blues team-mates in the squad has helped Tuivasa-Sheck fit it in. Returning All Blacks like front-row forward Ofa Tu’ungafasi is already impressed with his attitude.

“Rog, he’s just a great man. You know he’s humble, he’s always willing to learn, he’s helping where he can. He’s got tons of experience and he brings that into our environment.”

Tu’ungafasi and Tuivasa-Sheck are among over 20 players of Pacific heritage currently in the All Blacks squad and include other debutants like Highlanders halfback Folau Fakatava.

“Super proud, you know, my family’s super proud as well,” he says.

“If I didn’t get the opportunity with the All Blacks then probably, I’d represent Tonga but yeah, I represent this jersey and the All Blacks and New Zealand so I’m really proud, grateful and blessed to be here.”

For his part, Tu’ungafasi welcomes having more Pacific players in the squad: “There’s always been a mixture of cultures here in this team and that’s what makes this team special. You know, when we all come together, it’s very powerful and it’s great to see that number grow every year.”

As for Tuivasa-Sheck: “I tell everyone, you know, proud Samoan boy from South Auckland from Samoa and here I am on the big stage representing my friends and my family.”

In the meantime, the touring Ireland team will pose a stern challenge for the All Blacks across three matches to kick off the test rugby season. Being a member of the squad means the call-up to the playing 23 could come anytime.

“Oh, just looking forward to seeing the boys get out there and I’ll be putting my hand up for it and waiting for my opportunity,” Tuivasa-Sheck says.

Meanwhile Tu’ungafasi, selected to start the first test against the All Blacks at Eden Park, says there’s plenty of excitement from rugby fans for this series.

“Obviously in the Past we’ve had some great contests. You know I think everyone here, even the whole of New Zealand, is looking forward to the games. Yeah, I can’t wait.”