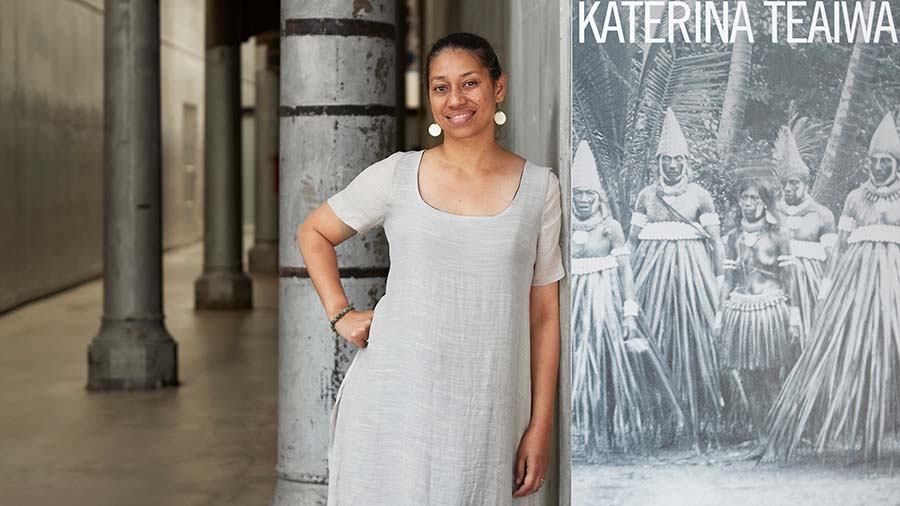 Sitting almost 300km east of Nauru, Banaba, or Ocean Island, was once a thriving place.

That is until 1899, when New Zealander prospector Albert Ellis discovered the island was densely rich in phosphate.

Miners from Britain, Australia and New Zealand immediately descended upon the small atoll and began overturning the earth, digging up as much of the mineral as they could.

Soil that had absorbed the ancestors of the Banabans was dug up, phosphate was extracted and used to enrich the fertiliser for farm lands, crops and livestock abroad, including New Zealand.

It is this history which is centred in Project Banaba, a multimedia exhibition created by Banaban scholar and artist Katerina Teaiwa.

In an interview with MTG Hawke’s Bay, Teaiwa says the project “extends our thinking about land and landscapes beyond what is fixed, what we think is fixed because for Banabans our land moved.”

“We always think of people moving and travelling and re-settling, but in our case it was both people that were moved and land that was moved.

Teaiwa asks, “if our land moves and if we’re indigenous to those lands, then what kind of indigenous people are we today?”

The exhibition first opened in Sydney’s Carriageworks and has since travelled from Australia to New Zealand and is currently showing at Te Uru Gallery in Waitakere.

Project Banaba will also be showing alongside Te Kaneati, a series of Banaban cultural revitalisation master-classes.

Presented by the West Auckland Banaban community in Ranui, and led by Banaban elder Maggie Corrie-Kaipati, the classes are designed to strengthen Banaban cultural identity, language and creative arts in the diaspora.

Project Banaba’s arrival in Auckland is of great significance, as this city was where the phosphate mining companies were based.

While the countries responsible for the mining profited greatly from their plundering, Banaba suffered greatly.

“The way I think about it is, it probably took millions of years for that island to grow geologically…it took thousands of years for Banabans to figure out how to survive on that island,” says Teaiwa.

“Once the phosphate mining companies arrived, it took just 80 years to destroy the landscape of Banaba.”

Project Banaba and Te Kaneati are currently showing at Waitakere’s Te Uru Gallery, from 5 March – 29 May 2022

Food banks are a godsend, but this charity believes there’s a better way

Pasifika councillors making a difference in the deep South