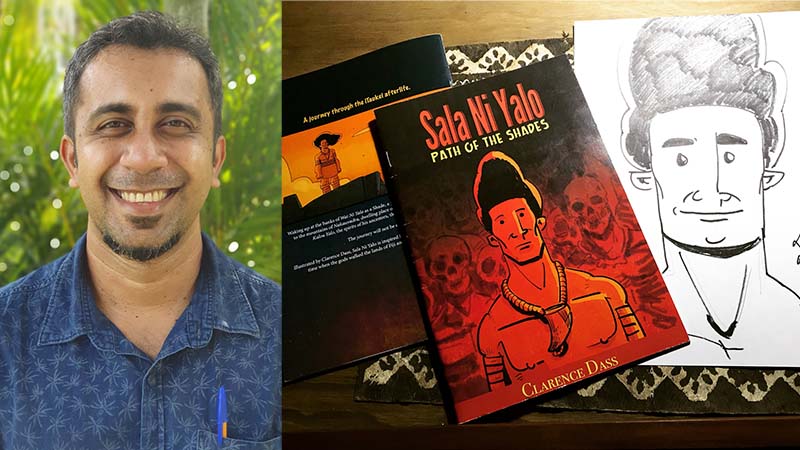 The comic book started as a mini-research project for a course at the University of the South Pacific. Clarence, a Fijian cartoonist, was studying Pacific Thought, Philosophy and Ethics when he asked his course coordinator Dr Tui Rakuita if he could do the project as a comic book. Not only did Dr Rakuita approve of the proposal, he loved it. So Clarence dived into his work as a chance to merge his passion for Pacific mythology with his craft for comic books.

He went on to illustrate the iTaukei tradition of the One Hundred Nights, a cultural practice which details a series of tasks conducted by family members to aid the deceased person in the afterlife.

Researching for his comic book he came across a piece of mythic literature pertaining to the journey of a spirit through the afterlife. Clarence was captivated by the imagery of the tale. He decided to name the book Sala Ni Yalo, an eastern province of Fiji, commonly associated with the tale.

The design of the book was made with heavy influences of Clarence’s native home, Fiji, assuring that every character he designed for the book was rooted in Fijian culture. “I drew inspiration from Fijian effigy statues, serving bowls, actual geography and the language in the book is iTaukei with translations”,  Clarence says.

According to Clarence, there are characters in the book that have never been illustrated or given form and he was excited to visualise these characters and places so that people could not only read about them, but also see them.

Clarence explains the significance of Sala Ni Yalo, “because in Fiji we do not get many chances to share Fiji/iTaukei stories. Especially not ones that pertain to death and the afterlife.”

Because Fiji is such a melting pot of rich cultures with plenty of opportunities to learn about traditional stories from other cultures, Clarence argues in support of promoting more Fijian old myths and legends. “We should know these stories. Myths and legends were a way for people to make sense of the world back in the day, and to deny these stories or not know these stories is like denying a part of a culture’s existence.”

Clarence has taken the original texts and used it as the basis of the story while extending it into a fuller narrative. Many of the traditional storytelling elements remain faithful; the premise about a spirit travelling through the afterlife with minor events he faces and things he meets have been shaped to form a linear narrative.

Clarence reached out to Mr Simione Sevudredre, Principle Cultural Officer at the iTaukei Institute of Language & Culture with the Ministry of iTaukei Affairs as part of the research process of the comic book. Mr Sevudredre supplied Clarence with research literature regarding iTaukei burial rights, the One Hundred Nights tradition and other old spiritual beliefs from Fiji.