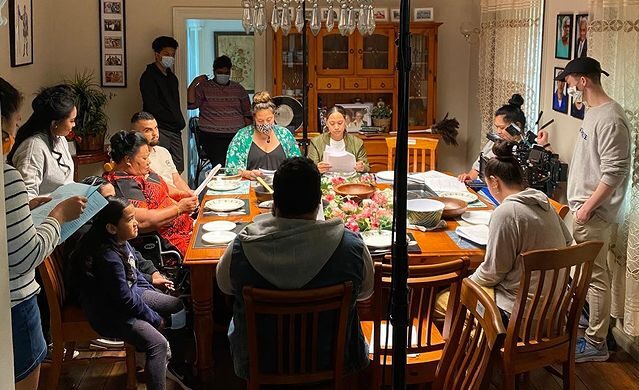 As one of three Tongan students attending a suburban Catholic college in Melbourne (the other two were my brothers), I spent the latter part of my high school career being compared to Jonah Takalua.

Played by pālangi actor Chris Lilley, the Tongan student was one of three main characters in Lilley’s mockumentary sitcom Summer Heights High. While I never graffitied “dick-tation” pics on the wall or swore at my teachers, for years Jonah Takalua was the only Pacific frame of reference my fellow Aussie students had to understand me.

It was kinda funny… but mostly disheartening to know that my entire life and experience as a Pacific person had been watered down to a caricature. Sure, you could see Pacific people on Australian television – Jay Laga’aia, Paulini, Vika and Linda and a whole lot of footy players – but I had never seen the Pacific experience represented on screen.

Now it’s 2021. With new times comes a whole lotta change, and Pacific arts practitioners are slowly becoming a part of the Australian arts fabric. Samoan creative Gabriel Faatau’uu-Satiu recently released the pilot of his exciting new digital series Breaking Bread, a string of episodes each framed by a Samoan tradition and food. With the first episode, Fāgogo: Povi Masima, debuting at the Pasifika Film Festival last year, Gabriel says he was heavily influenced by his own family.

“My Grandma lives here in Sydney, and she’s 95 and she has a massive as family,” says Gabriel. “My family are always crazy when it comes to food, [especially] around dinner. We always hear a lot of crazy stories, and I’m the one who always asks a lot of questions – even if they’re really taboo questions.”

“It’s that thing about the taboo stuff, coz we don’t talk a lot about [it]. I feel like our young ones will support it, but I also feel like the old ones need to get behind stuff like that. They like to talk about that stuff and address it, but they like to just brush stuff under the carpet. I wanted to do it in a way that was confronting but also very relatable, and food is the best way to do that.”

Fāgogo: Povi Masima features all of it – family, food and funny forbidden questions. But it’s not your run-of-the-mill happy Pacific aiga story, even though “that’s what we were selling it as,” laughs Gabriel. Funded and developed through the Pacific noir incubator programme, the pilot has a distinctly noir-ish feel about it – minimised chiaroscuro lighting techniques, an understated soundtrack and a bit of risqué Samoan dialogue. Beneath the veneer of this close-knit family sits a dark underbelly that provides a twist ending so unexpected but oh so refreshing.

As both writer and director for the Breaking Bread series, Gabriel’s creativity is in full throttle and a pure delight to see. Despite studying to become a writer, he appreciates the demanding role of the director. “It was a lot,” he laughs.

“I’m still learning, obviously, but it’s definitely something that I see myself doing moving forward. And when I saw the difference between the work coming out of New Zealand and here, it forced me to step up my game and just do it.”

Before his shift across the Tasman, Gabriel had already established himself in Kiwi arts circles as an accomplished writer, performer, theatre practitioner and critic, and champion of budding brown talent. “I was in this space where I was just seeing [Pacific] content being pumped out all the time,” Gabriel says.

But in Sydney, “It was like going from one extreme to the other and I really had to find people. It took a lot of work.”

Featuring an all-Pacific cast, many of the newcomers on set were cast from the community. However, you might spot a few recognisable faces seated around the table. “The Pacific community here in Sydney is very small, so it was actually easy to reach out to people like Angela Tiatia, Greg Semu, Rosita Vai-Gibbons,” Gabriel says.

Gabriel and the team are currently waiting for more funding to complete the series. But don’t feel too disappointed about the wait; Gabriel is already hard at work on his future projects. “I just launched the production company that I run, Satiu Studios.”

“I directed an experimental short film a year ago, but I haven’t released that yet. This half of the year I really wanna get that out… And then there’s also a book that I wrote. It’s a children’s book.”

So while you wait in joyful anticipation, you can help yourself to a viewing of Fāgogo: Povi Masima below.

TALANOA: Learning languages is embracing others