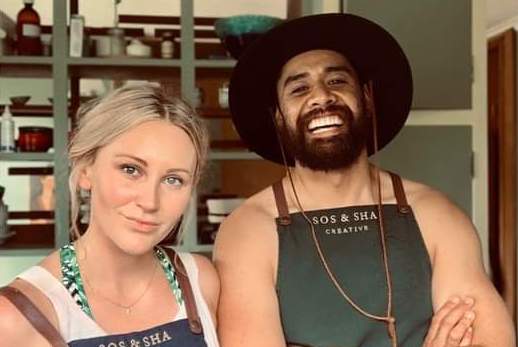 Pasifika creative Shadon Meredith and wife Amelia Reid-Meredith are seeking to raise funds to take their theatre show Waiting to Wellington with a season at BATS Theatre.

With a mission to explore engagement through different artistic mediums, the pair have created their own company called SOS AND SHA Creative.

Waiting is written and performed solo by Shadon as his memoir, in a form of a letter to their son. He takes the audience on an emotional, gripping journey of life and cultural challenges faced by minorities in Aotearoa New Zealand.

Directed by Amelia, the duo is crowdfunding through Boosted to raise $25,000 to help pay for sets, props, travel expenses, technical equipment, venue and payment for their collaborators.

Our reporter Ann-Tauilo Motuga caught up with the married duo to talk about their theatre piece and upcoming projects.

How did the idea of ‘Waiting’ come about?

Waiting was born out of a time in our lives where death, grief and uncertainty were lurking. We had given up our lives in the big smoke to nurse Amelia’s mum who had been diagnosed with terminal bowel cancer. Shadon used his poetry as a way to channel his emotions during this time, and they were the beginning of what became Waiting. The poems then were collated like an album or a mix tape, and from there the story unfolded.

What was the creative decision behind having a one-man show?

Primarily the fact we were stuck on a farm 40 minutes out of Nelson. Disconnected from our creative kinfolk, there wasn’t really much other choice. Shadon had signed up for the Nelson Fringe as a creative outlet not realising how close we were to losing Robyn (Amelia’s mother), so it was all a bit of a pressured environment. With two weeks to go, Amelia jumped on as director and Robyn, on her hospital bed, became our dramaturg. We made Waiting in the living room with what we had. Looking back, we didn’t know how far this show would take us, and now we look back so fondly of those times in the living room.

For those who haven’t seen ‘Waiting’, what sort of imagery or visuals can we expect?

The poetical text transports us to many different places around the world from Aotearoa, Sāmoa, Cambodia but most specifically the ‘Windy City’ Pōneke, Wellington. The imagery is strong through the text and with magical elemental moments using very simple minute props. The show is visual, very contained in a domestic environment which allows the language to sing.

What themes are conveyed in the play?

The major themes of Waiting tackle male vulnerability, mental health, identity, and fatherhood. The premise is a letter to our son, Arlo, which many of our audience can relate to as we weave through different personal stories of Shadon’s life in a universal way.

As a winning piece for multiple awards since 2017, what long-term goals are you hoping to achieve with the success of Waiting?

The big dream is of course to take the show on an international tour when the world opens up. We dream of it being seen in Hawai’i, New York and tackling the Edinburgh Fringe. But more so we hope to take this intimate show across Aotearoa, especially to the rural sectors.

What can we expect from Sos & Sha Creative in the future?

We’re already developing our next show ‘Clouds’, which is inspired by relationships and the work of Albert Wendt’s ‘Sons for the Return Home’ and the writing of Sally Rooney. We have a book on the go which is set to be out next year, Covid permitting. And we are working on educational resources so we can help inspire the country’s future creatives.

To help SOS AND SHA Creative take their show on the road, you can donate through the Boosted link here: https://boosted.org.nz/projects/waiting-by-sos-and-sha-creative