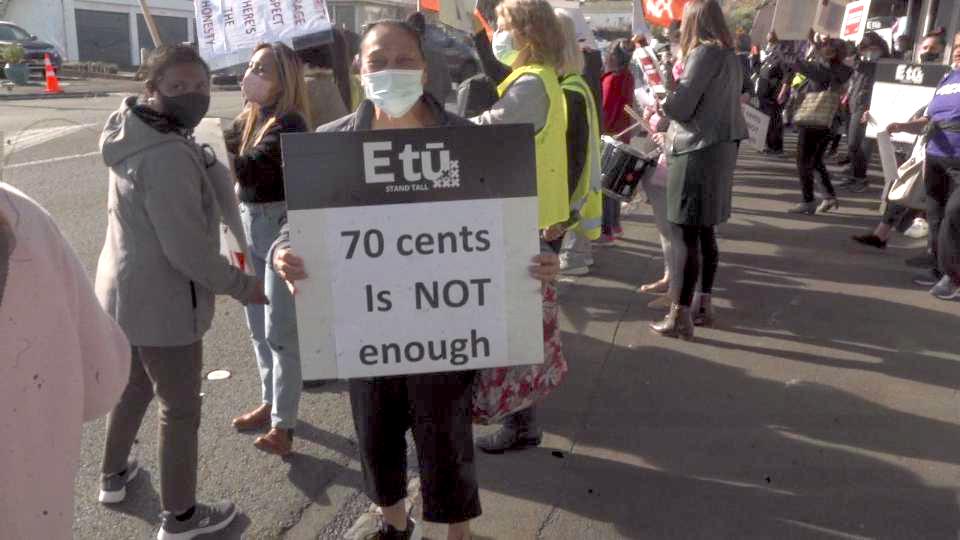 Care and support workers delivered a petition to the government this week after receiving more than 10,000 signatures in 10 days, demanding a pay boost.

The 2017 settlement, which raised wages for care and support workers, will expire in June, which means new pay rates will need to be negotiated, which could take up to 18 months.

The government has offered a 70-cent an hour pay increase while they draw up a new settlement, but this equates to a 2.8% rise which is less than half the current inflation rate of 6.9%.

E Tu Union Director Kirsty McCully says care and support workers are some of the lowest paid in the health sector.

“If you can go down the road and earn $30 an hour picking kiwi fruit instead of $21.84 for delivering care and support to our vulnerable, elderly, people with disabilities, then you’ll probably go and do that.”

McCully says that unless the government responds urgently, workers will be left with a low pay increase with no certainty about how employers will deal with their qualifications and progression.

Earlier this week, care and support workers in Auckland gathered outside Jacinda Ardern’s electorate office in Mt Albert as part of a nationwide rally against the government’s pay offer.

Mele Kumar of Tongan descent, has worked as a caregiver for 19 years, and says she attended the protest because carers deserve more money.

“We’re not superwomen. We’re human beings, and we want to be treated fairly.”

She said staff shortages are an ongoing problem, with many workers working double shifts over the last two years of the Covid-19 pandemic.

“You know we have families to go to. Sometimes we’re tired, and we take it off our family [time], which is not supposed to be [like that].

“The cost of living is going up, you know, and our pay is still the same. You go to the shopping centre, and you do a shop for your family, you take $100, and you can only [buy] five or six things. You can’t even cater for your family,” adds Mele.

An E Tu Union delegate, who asked not to be named, says care workers have been undervalued for too long.

“70 cents just doesn’t cut it with our workers.

“Working in communities seven days a week and only one day off? A lot of us work more than 40 hours.”

She says Māori and Pacific workers will be struck by the pay offer and hopes the government will hear their concerns.