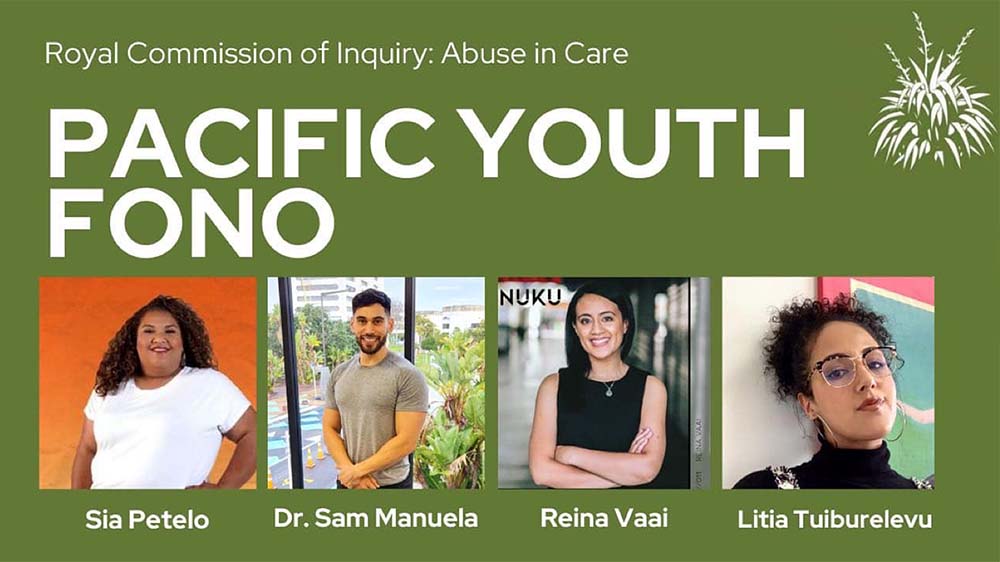 After months of hearings, the Royal Commission of Inquiry into Abuse in Care continues its investigation into the experiences of young people and adults in care.

So far, all the survivors who have given evidence for the Inquiry have been adults. But this week, the Inquiry’s Pacific team will host a Pacific Youth Zoom fono.

Member of the Inquiry’s legal team and a facilitator for the fono, Reina Vaai says it’s important to hear feedback from our youth.

“Young Pacific people are diverse, so it’s important to talk to youth to hear their feedback, listen to any suggestions they might have and to share their ideas,” Vaai says.

“We are engaging with lots of different communities and groups at a later stage. We have a youth fono specifically for Pacific youth that have recently been through the care system.”

“There are also fono planned for church groups, those in health and disability sectors, social services… We’re engaging with our community and hoping to raise awareness of our work too.”

Vaai and the team are hoping to discuss various aspects of their report with attendees. Reporting abuse, ethnicity recording, systems and obstacles will be at the forefront of the fono’s discussion.

Petelo has been hosting a number of youth fonos during lockdown, and believes adults sometimes underestimate what youth have to contribute.

“Our youth care, and they just want to see change happen more than the conversations about it happening,” Petelo emphasises.

“Listen to [youth] comments, ideas, suggestions and especially listen to how their feeling.”

“Adult presence in the fono is important so youth know and feel they’re being acknowledged and listened to, and not just there to tick a box on someone’s to-do list.”

Vaai also adds the fono is open to anyone who wants to contribute or learn something about the Inquiry, and the team hopes young people feel empowered to join the talanoa.

“One thing people assume when they see a Zoom that might have a few lawyers sitting in is that only people with university degrees or people who want to be lawyers can join or share,” says Vaai.

“Yes, I’m a lawyer and I work with a team of amazing Pacific lawyers. But first and foremost, we are Pacific. We don’t want anyone to feel excluded or feel as though they don’t have anything to share.”

“I remember one survivor who shared at our Pacific hearing in July. She said, ‘We don’t have degrees, but we have ideas.’ That comment has always stayed with me, because at the centre of our work are all our survivors. We are guided and led by their voices.”