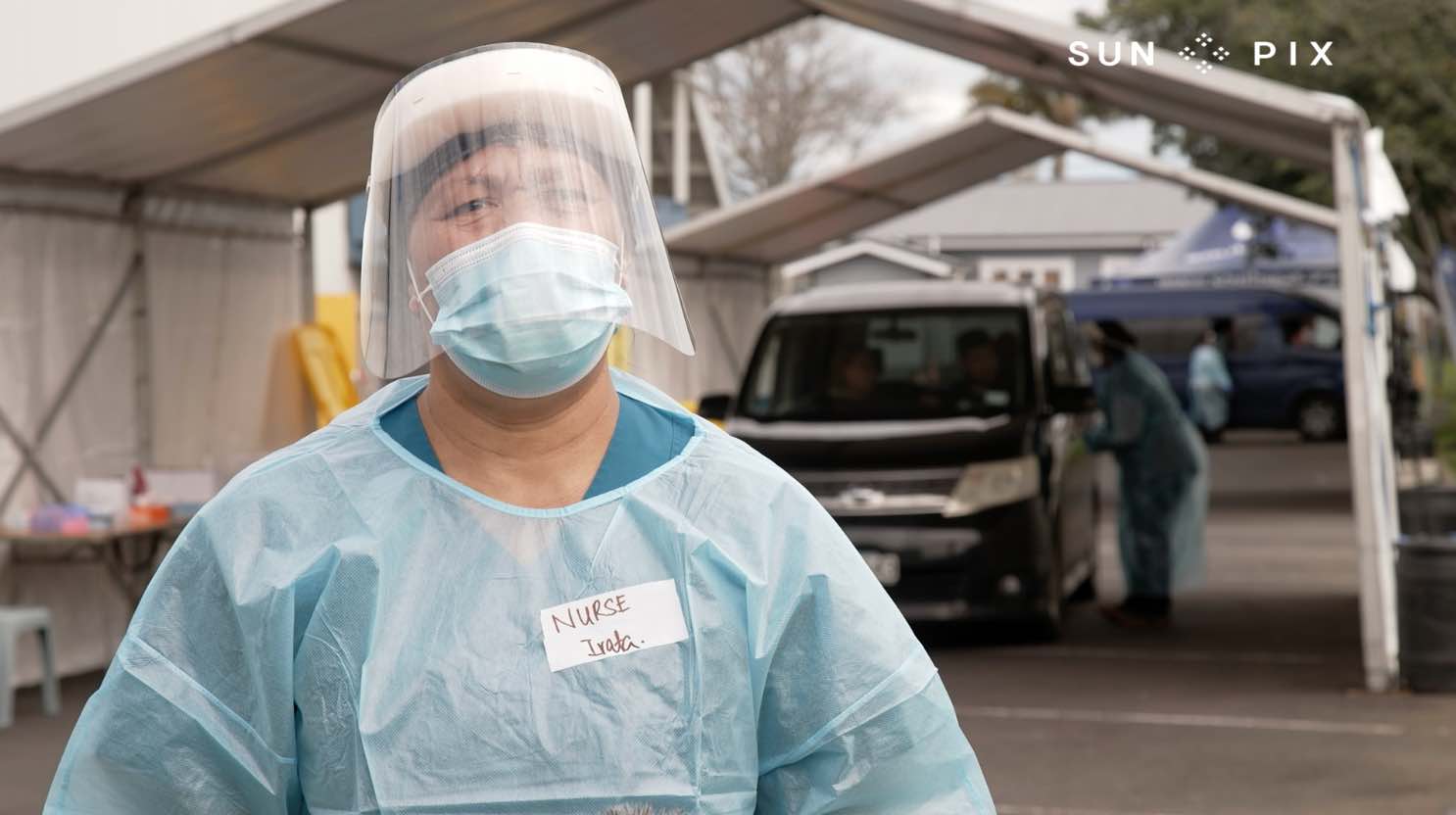 Sally Dalhousie and her team of frontline workers from the Fono have been operating out of a pop-up testing centre at Mt Smart Stadium to help with the huge number of people wanting to get tested since the lockdown.

“This is a war; we are at war with the virus,” Dalhousie says.

“We are seeing about 300 a day; on our busy day we saw around a thousand. So last week we were in Glenfield for three days, we were doing 1500 people a day there.”

It’s a similar scene around the county, with cars lining up for hours to get their tests done.

A young Tongan man who went through the drive-through centre didn’t mind the quick nasal swab.

Some essential workers have done the test multiple times, as they continue to work through the lockdown.

One man and his colleague stopped in to get a test without hesitation.

“Just go and get vaccinated and get tested. It’s better to be safe than sorry,” he says.

Pasifika at the Centre of Outbreak

Prime Minister Jacinda Ardern and senior health officials have been updating the nation daily with the locations of interest and confirmed Covid cases. One of the largest clusters involves the Samoan AOG Church in Māngere which already accounted for nearly half the number of cases by the middle of the week. As cases grew past 200, extra pop-up testing centres were added on site as the Ministry of Health urged church members in the area to isolate and get tested.

Reports show multiple Covid-19 cases are linked to a church service on the 15th of August, where it is believed close to 500 people were in attendance.

South Seas Healthcare nurse Irata Passi says, “Swabbing is for anyone entitled to have a test. If you have family that have been tested positive, it’s good for the family member to come and have a test.”

Staff swabbed around 1500 people in the first three days they opened to the public, with close to 90 percent of them Pasifika.

An elderly Samoan man drove himself to get the test because he said, “I love my family.”

“We have to do it because of the Covid now, so if you are not testing, you spread the Covid,” he says.

In another car is a family of five. Mum is the driver, and she has waited a long time to get tested.

“We’ve been in the waiting line since Sunday. We didn’t quite make it. Then we tried again yesterday and the Pukekohe AMP showgrounds, and we are just short again, and now we’ve come all the way to Māngere to get ourselves tested,” she said.

Irata is pleased the community is using the free service, especially those who don’t speak English.

“It’s good for them to come for the test and for our Samoan [people], we have nurses that speak the language,” she says.

Concerns over ‘Singling Out’

However, earlier in the week when Director-General of Health Dr Ashley Bloomfield announced more than half of the current cases are Pasifika and linked to the Samoan church, community leaders were concerned over the negative attention it brings to South Auckland.

Pakilau ‘o Aotearoa Manase Lua says, “When they highlighted the fact that the first case was from the North Shore, we didn’t find out what church that person went to.

“In fact, there was a church in Freemans Bay that was impacted first and not much attention there, yet all of a sudden when it hits South Auckland, there tends to be an overreaction.”

The Tongan leader is the chair of the Pacific Response Coordination Team at the Pacific Leadership Forum, and he wants to commend the community for having the highest testing rates in the country.

However, Pasifika have the lowest vaccination uptake so far, and Pakilau is calling for change.

“I want to commend all the frontline essential Pasifika workers, the providers. They are doing their bit; it’s the strategies brought down from the top that aren’t working,” he says.

“You can’t throw a blanket approach over the whole country and expect it to work for Māori and Pacific. The numbers don’t lie; it’s not working.”

Associate Professor of Public Health at the University of Auckland Dr Colin Tukuitonga met with his Niuean community on Zoom, and they had a special request.

“The community [asked] for a targeted Niue vaccination event provided by Niuean doctors and nurses and health workers with the community.

“This will obviously be available to everyone, but as one option. I know the Tongan community as well has been talking about this idea. In other words, I think we need to be much more creative. We need to think about different options,” Dr Tukuitonga says.

Other Pacific health professionals like Dr Debbie Ryan from Pacific Perspectives suggest the way forward is working with the community.

“We know that when we put these interventions, these initiatives through our providers, we use the environments that are familiar,” Dr Ryan says.

“We use our health workforce that have the ability to speak to our people in a way that they can trust. Unfortunately, this is too often not the case, and here we are playing catch up again.”

The current outbreak passed 200 cases on Wednesday, and while lockdowns are likely to continue for Aucklanders, many have reached out to food banks like the Fono’s Feleoko for help.

The person in charge of this task is Europa Kupu, who is the Whānau Ora manager.

“These families have lost the income in their home, and some of them have not been making basic needs during the week,” she says.

“Some of them are our regular families, and during the lockdown, we have a huge increase of numbers coming through from the community, from our church and community groups as well.”

They deliver contact-less to around 100 families a day. That number is going to include those self-isolating at home.

“They are already calling our 0800 number in regards to our food requests, but at the moment we are competing with supplies as well.

The Delta variant is a game changer, but one thing’s for sure — our community is fighting back with the help of our frontline workers.