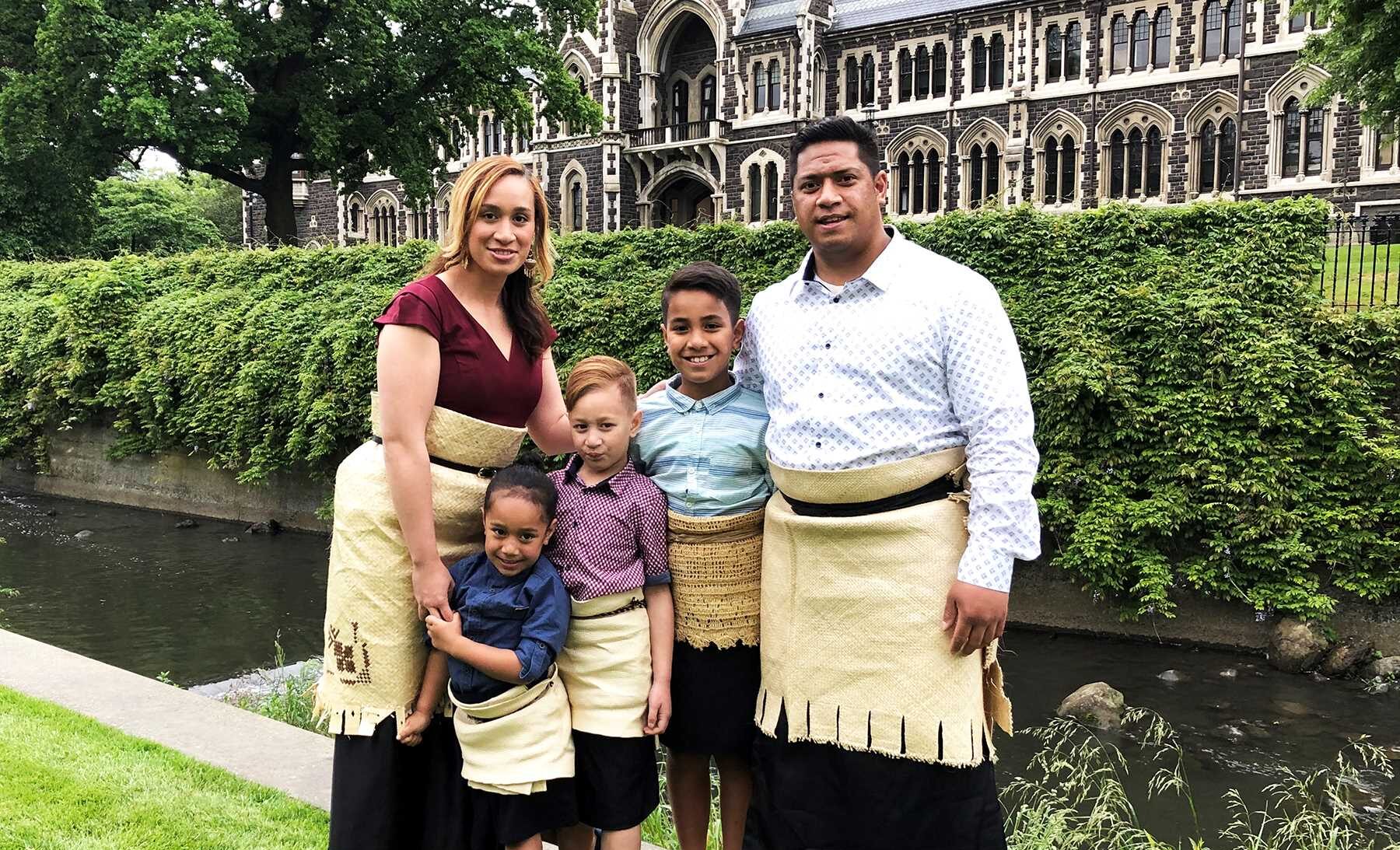 After three years in Dunedin, Peter Latu is the sole 2020 graduate of the School of Surveying’s BSurv(Hons) programme. Peter gained his degree with first class honours, a significant achievement after moving here with his wife Salome and three young sons for study.

With a father as a surveyor, Peter’s path may have seemed inevitable, but his interest in mathematics originally led him to complete his undergraduate degree in the subject.

However, even though Peter enjoyed mathematics he found it difficult to engage with the topic in a solely classroom-based learning environment, so it was the desire to involve physical field work in a career that turned him towards surveying.

After completing a National Diploma in Surveying at Unitec in Auckland, Peter’s parents challenged him to extend his academic journey, as one of their reasons for moving from Tonga to New Zealand when he was 10-years-old was for education and career opportunities.

That’s when Peter, Salome, Piula (9) Laumeesi (6) and Savae (4) moved to Dunedin for the BSurv programme, which expanded into honours in the final year of the degree, motivated by his interests from both Unitec and the School of Surveying.

“I had never envisioned doing honours and a dissertation, but as we had moved to Dunedin as a choice, it was all about embracing opportunities like this that opened up,” Peter says.

He is now delighted to be working alongside his supervisor Dr Robert Odolinski, writing a paper from his honours research for publication. Dr Odolinski describes Peter as an outstanding student who is always curious for learning and self-driven to complete his studies to the best possible standard.

They weren’t easy years however, which included juggling the home life demands with the pressures of maintaining financial stability. The family managed this by Peter undertaking casual work in the School as a tutor, having a part-time job with a local surveying firm in his final semester, and with generous help from his siblings and parents.

“It was really tough for the last couple of years, especially when Salome went to Otago Polytechnic to do a one-year New Zealand Diploma in Tourism and Travel as well as working part-time, so we had to work our lives round each other’s schedules and also make time for everything else.”

During lockdown earlier this year, the couple managed their daily lives by dividing each day into morning, afternoon and night shifts to share responsibilities as the family’s studies could not be undertaken simultaneously due to lack of resources.

“We only had three laptops between us which had to be shared with the kids for their school programmes, but it was also nice to be together as that doesn’t happen often,” Mrs Latu remarks.

“I’m so proud of him and for what he’s achieved between study, work, and always having time for our kids and their sporting pursuits,” she adds.

“Peter is a really hard-worker and his priority is his family, so whatever he’s doing is always for our boys.”

Peter has also embraced any opportunity to involve his family in his studies, including in fieldwork for his research project based in Waikouaiti.

As a result, eldest son Piula now has a keen eye for finding old survey marks and has also become interested in the field of surveying.

“In hindsight, I was lucky to have my parents, brothers, and wife believe in me even through times of uncertainty, in terms of my initial educational decisions after high school,” Peter says.

He also acknowledges the “huge help” of his wife, for all the support she has given which has helped ease the pressure and share the load.

The couple agree they have really grown as a family during the time living in Dunedin as it has allowed them to live independently and manage all aspects of life themselves.

“What we feel we are doing is laying the foundation that gives our kids good opportunities in the future, just like Peter’s parents did when they made the decision to move from Tonga to New Zealand to give their kids a better life,” Mrs Latu says.

The day after graduating on the 19 December, the Latu family will return to Auckland for Peter to start a new job and they are all looking forward to their new journey ahead.

Peter says however, that it definitely won’t be the family’s last step.

“What I have taken away from our time in Dunedin is to keep asking questions like ‘what’s next’? We should always think like this as there is always something beyond our achievements that can expand our knowledge.”