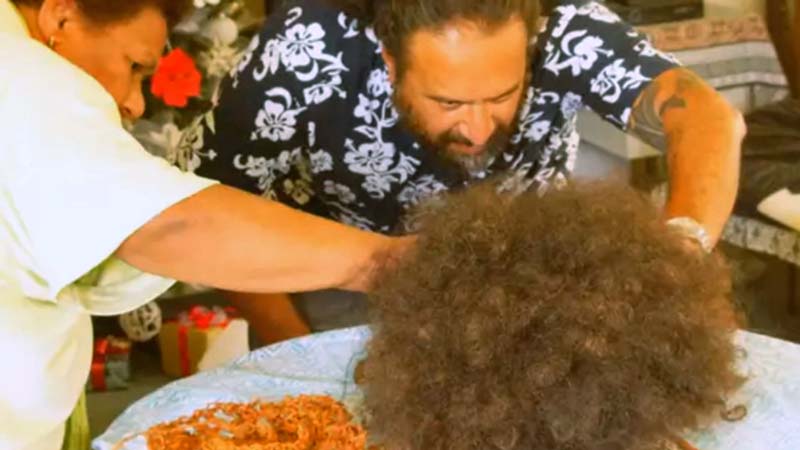 For 25 years, Daren Kamali has cut and collected his locks to help restore an old Fijian practice known as ulu cavu.

“Normally, you cut your hair and wear this ulu cavu wig into the next war but normally, that ulu cavu wig is a sign of mourning as well,” Kamali says.

“They wait for the tangi period just to finish. Normally the pogi drau is 100 nights, and the hair underneath grows back, and that’s when you remove your ulu cavu.”

The ulu cavu has not been practised for more than 200 years in Fiji. It’s believed to have been abolished in post-colonial times as it was regarded as heathenry.

“I was going to cut my hair and take it to Fiji and plant it, dig and bury it and plant a tree on it, maybe a coconut tree normally, but then I saw the ulu cavu that was displayed here at the Auckland Museum,” Kamali says.

This started the ulumate project creating a database of all the ulu cavus worldwide.

“When we went to the UK, we only got to visit Cambridge and Horniman museum which had a collection of our other ones like the Reeves Museum and the British Museum alone in the UK that would be 2,000 worth of ulu mates.”

Around nine ulu cavus have been discovered at museums here in New Zealand, and six are in Fiji.

“For me, it’s not necessary making, reviving the making of the wig but the memory, the understanding of it the education maybe through education it can be part of our history to our young people of today to learn that this the way we did things, our old people back in the day,” Monolagi says.

Artist and photographer Ole Maiava is thrilled that the project has brought back the forgotten, jumping on board to publish a book so that this indigenous taonga is available to everyone and not only kept at museums.

“Quite often, we sort of don’t give credence to our grandparents and our elders about the stories they tell us, but there is actually a few life lessons that’s going to help us move forward, especially with the idea that we are now being seen and we are now being heard in the glam sector we are no longer part of the display we are actually someone that can talk about the display,” Maiava says.