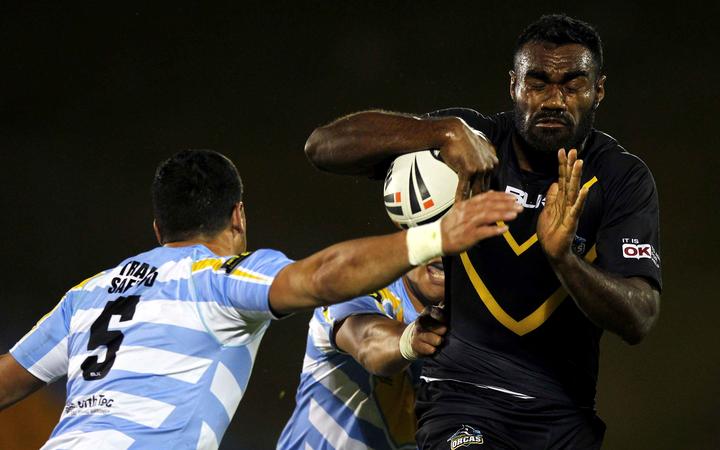 A fundraising page has been set up to support the family of Fijian rugby player Nemani Waka, who died in France earlier this week following a long battle with cancer.

The 34 year-old second rower played club rugby in Wellington and for East Coast in the Heartland Championship before stints with Chambéry and Rouen Normandie in France.

Liana Mua is a close friend of Nemani’s partner Francesca Rex-Horoi and started a Givealittle page to help cover the cost of repatriating his body back to Fiji.

“It’s always quite expensive but with the whole situation in Fiji right now it’s kind of making it even worse. We’re looking at NZ$15,000 for the repatriation fee and then I think with quarantine and everything like that you have to pay for yourself, so we’re looking at quite a hefty amount,” she said.

Waka was a “gentle giant” who was doing his best to support his family, Mua said.

“He was so calm, he was so caring, so respectful to everyone he met. (He) really loved the simple things in life and just wanted to make his family happy.

“Every paycheck he’d receive he’d send money back, so he was the provider. He’d send money to his mum and four sisters back in the village, as his dad passed away, so he was really really family orientated, loving partner.”

The former Wellington Orcas rugby league player was first diagnosed with tongue cancer three years ago, shortly after moving to France with his partner.

Liana Mua said the Rouen Normandie club had been a great support to Waka.

“They really took care of a lot of his medical bills and everything. They’ve been awesome throughout this whole thing really.”

Waka’s health did begin to improve after undergoing chemotherapy sessions but later began to deteriorate again.

His passing on Tuesday has left his partner, Francesca, in a difficult situation, Mua said.

“She’s stuck and she’s over in France, a foreign country. She’s lost without him, I don’t even think she’s slept,” she said.

“She stopped her life to move to France and they did long distance beforehand. Early on in their relationship she was working in Japan and he was still in Wellington…then he got a contract in France and she left Japan and she moved to France, then just hit with the cancer and it’s been like that since, so they never really caught a break really.”

It will cost NZ$15,000 to repatriate Nemani’s body from France to Fiji to be with his family, while his partner would also have to cover the cost of two weeks in managed quarantine upon arrival in Nadi.

In less than two days, the Givealittle page has almost hit its initial target but Mua hoped more can be raised to support Waka’s family in Fiji.

“I just found out he does actually fully support his mum and his four sisters. I knew he sent money back every paycheck but I didn’t think he was the actual provider, I didn’t realise his father had passed away,” she said.

“Because he does have the four sisters and the mum in the village, any kind of funds big or small would really really help out so I don’t really have a cap on that. 15,000 would be wonderful but any more would be great.”

Local clubs connected with Nemani Waka in New Zealand and France have also been fundraising support for their former friend. Mua said the response had been overwhelming.

“We’ve even had a gym over in Sydney, a crossfit gym, they’ve never even met Nemani but they saw it and they donated $1000…just really generous, kind people out there. I’m really overwhelmed – I didn’t think we’d even get to $5,000 really. Even reading the comments on Givealittle it’s really lovely.”

Mua said if the Covid lockdown in Fiji does not permit Nemani’s repatriation him then all funds raised will be sent to his partner and his family in Fiji.

Meanwhile a get together for Nemani Waka’s family and friends​ in Wellington is being held on Saturday to celebrate his life through talanoa and kava.