HomeCommunity"I'm coming for your boss" - A personal essay about shared pasts, poverty and reconnection 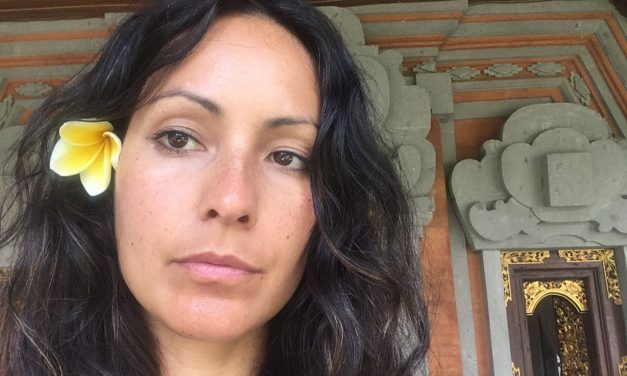 It’s just past 1pm on April 29th as I walk down West Coast Rd towards the Auckland Action Against Poverty action outside Carmel Sepuloni’s office, with the big red Carmel Sepuloni signage.

The action is asking for benefits to be lifted to liveable levels, keeping up with the cost of housing, food, and electricity; ending sanctions that make people’s benefit conditional on compliant behaviour; and the individualisation of benefits, so people aren’t punished for being in relationships.

There’s a neatly set up BBQ, a table with a red table cloth, a gaggle of people in black AAAP T-shirts, and some members of the public, grasping their sausages in bread with both hands.

The sun has come out. It’s the kind of Autumn day that twitches between grey and precision clearness in an instant.

Brooke Stanley is taking a photo for Twitter, and I can pick her out at a distance by her hair piled on top of her head, in a vaguely Frida Kahlo-Esque style that I recognise from when I knew her 10 years ago.

She used to come along to my boyfriend’s (at the time) gigs, and talk to him afterwards in a determined type way. She always had a friend with her, and they’d talk about doing an interview with my boyfriend for a show they were starting on YouTube.

When they finally did interview him, they had beers and I was skeptical. I thought she was slight, beautiful and Māori. A threat essentially.

She’s still slight and beautiful, but I know now Brooke is not Māori. She is Samoan, Niuean, and Pākehā and Tongan, like me. And we’re meeting under entirely different circumstances. I’m a journalist for Tagata Pasifika; she is the coordinator of Auckland Action Against Poverty, the only paid role in the organisation. Our meeting is not precipitated by admiration of a man.

“I love live music and really rated him as an artist. And when I love something, I’m pretty hundies – I hope it didn’t come off as anything other than being a fan,” Brooke emailed after I Facebook friend requested and she recognised me.

“I hope I didn’t come across as a hater. I can’t say being a musician’s girlfriend suited me much,” I email back.

I told Brooke about how the Tagata Pasifika reporting team and leadership had done an audience analysis and chose Pacific people who are struggling daily as the group we most want to prioritise and serve of the six audience segments we identified.

In a slightly cosmic-feeling coincidence, they had received 30.7 percent of the priority, the same percentage of Pacific Islanders who said in a Statistics New Zealand survey that they didn’t have enough money to make ends meet.

We’d had a follow-up group session looking at why we’d chosen that group and what we thought that meant in terms of our journalism and our work.

My reason for prioritising this group was informed in part by my childhood. How I remember walking over a discarded long neck Giraffe milkshake cup on the pavement, with my mother and my baby brother in a pram, and being so curious my mouth watered. I’d never had one.

I remember at the time I made some childhood calculations, that treats like that were for different people than me. I wasn’t sure how. I made a promise to myself then that when I was grown up, I’d buy myself all the lollies and junk food I wanted and I wouldn’t stop wanting it just because I was ‘big’.

Around the table we all had stories, about hard times, not enough food, parents with forces keeping them apart, racism or religion, solo parents, school yard derision, campervan living. Not everyone experienced material hardship, but those who didn’t had cousins and extended family who did. There were tears when we talked about the love that was there, and the happiness that the poverty didn’t strip, and the shame we feel now about the shame we felt then, before the long journey to where we are now.

Then we brainstormed what we could do about it.

Brooke talked about her background too. The privilege she had as the daughter of an All Black (smoking Joe Stanley) becoming visible for her when she realised that it wasn’t the same for all her family. How she was taught to share, and the fierce protectiveness she feels for the community AAAP advocate for.

“There’s a lot of shame,” she says. “It’s hard for people to share their stories.”

I’m meeting with Brooke today to get a better understanding of what’s happening for the people who come into AAAP’s offices in Onehunga, hungry, or afraid for what will happen next. It’s part of ongoing coverage Tagata Pasifika will deliver for our Pacific community experiencing hardship.

The omnipresent problems with housing are getting worse. Brooke tells me about a woman who’s been advised by WINZ to move into a house that’s $750 a week in rental with her children. She told her WINZ case manager she couldn’t afford it. If she took the rental, she said, she’d need help. WINZ agreed but then declined when she asked for a food grant.

This is when Brooke steps in to advocate. “Help me, make it make sense” she pleads, rhetorically, eyes rolling to the sky.

We’re engrossed in discussion when a volunteer who was handing out leaflets from the table stalks over, her face bright.

“That woman was racist,” she says.

“Who?” says Brooke – but the woman has gone.

“I had to tell her to go,” says the young volunteer.

Three other volunteers have come over to corroborate and debrief. One middle-aged woman is smiling, in the way someone with pumping adrenaline does.

“I just had to go like this,” she says, putting her fists behind her back.

They’re all looking at Brooke, as if calmed by her calmness.

After a couple of check-ins Brooke is contemplative.

“I’m sorry,” I say, “I think I was taking your focus when you could have intervened.”

“No, you don’t need to be,” says Brooke. “They can handle it. The fams is solid. We all have a voice, and everything any of us say is important.”

The volunteers are already heading back to the table.

The door to Carmel’s office opens and a young man steps out. Brooke runs over to hug him.

It’s Kieran Meredith, Carmel’s Press Secretary and Brooke’s friend, who was on the Mana Moana Pacific Leadership course with her in 2020.

Brooke is a soft shade of red.


After he leaves Brooke tells me he knew she was coming.

“What would you say to Carmel if she came out?” I ask.

“What questions should we ask her,” I ask.

AAAP decided to have a sausage sizzle instead of a picket out of respect for the Glenn Innes community. It’s a warmer vibe than a group of people yelling, says Brooke.

When Sue Bradford founded the group 10 years ago there was more of a protest platform. Then when Ricardo Menéndez March took over in 2017, the focus shifted to advocacy, and teaching people their rights.

The advocacy will continue, says Brooke. Actions too. A march is planned down Ponsonby Road.

“Queen street is quite retail,” says Brooke. “In Ponsonby, people are sitting outside having a good time. I want to piss them off. They don’t see the poverty in New Zealand. I want to put it in their faces.”

Her face takes on a set that’s familiar to me, from the most effective activists I’ve interviewed. There’s a steeliness to it, a relentlessness, but it comes from a desire to protect.

“Did you know emergency housing is rolled over every week? MSD doesn’t send anyone to see how safe it is, and the main difference from rentals is that people have no tenancy rights.”

People are kicked out because the WINZ case manager thinks they’re not looking hard enough for alternative housing.

“We advocate not to take no for an answer.”

She shows me pink business cards the volunteers are handing out. They say ‘Work and Income staff are not allowed to make your situation worse.’

I put it in my handbag, thinking that it’s a powerful token. New information to me, and that could certainly change people’s experiences at WINZ.

It feels like my forehead is burnt, so I take my leave. Today is just the start of our conversations.

Tongan family remembers Grandfather who served in the Māori Battalion