HomeCommunity#IWD: Meet the women in front and behind the Tagata Pasifika cameras 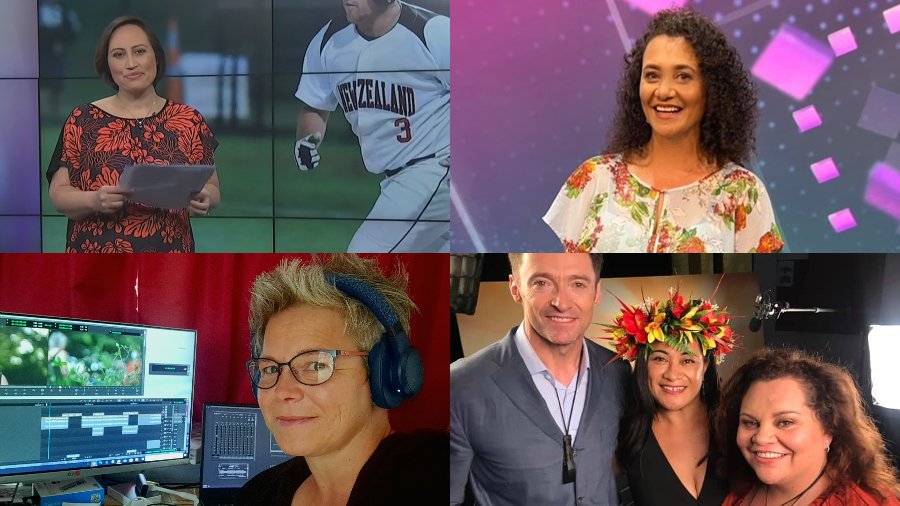 #IWD: Meet the women in front and behind the Tagata Pasifika cameras

As we celebrate International Women’s Day, we take a moment to honour some of the women who have worked on our show for over a decade.

Where did your journey with Tagata Pasifika begin?

NGAIRE: I was working in the Māori Programmes Department at TVNZ and auditioned for another show. Tagata Pasifika Producer Taualeo’o Stephen Stehlin, asked me to join the presenting team.

MARAMA: Before Tagata Pasifika, I worked at Radio 531pi and Niu FM. Initially, I hosted a daytime show and then became a reporter/newsreader and produced Breakfast with Mario Gaoa on Niu FM. Grateful for the opportunities I had there, especially being mentored by Sefita Hao’uli.

CHARLOTTE: I started freelancing at TVNZ in 2005 and edited on all the in-house productions in the Maori programmes department. Tagata Pasifika was under that umbrella, so I edited TP on and off till about 2010. In 2016 I became the lead editor for TP and I’m still here on a part time basis.

SOANA: A few years ago I went back and completed my Bachelors Degree in Communications. Luckily I was interviewed for an internship by a lovely man named Peter Parussini, who was a big boss at TVNZ at the time. He had faith in me and asked Tagata Pasifika Producer Taualeo’o Stephen Stehlin to take me on for what I thought was two weeks – and I’m still here!

What are some of your most memorable experiences working for Tagata Pasifika?

NGAIRE: Over 26 years there have been many incredible stories that we’ve told. I was lucky enough to document my first ever trip to Rotuma in “Salat se Rotuma“. It really transformed my life, my connection with my family, land and language and it was a privilege to be able to share this story with my Rotuman community and the wider Pacific communities.

CHARLOTTE: There are so many – most of them are about the amazing people who have been profiled on the show and learning about their stories, their challenges and triumphs. I remember editing the Samoa Tsunami story with Adrian Stevanon through tears and when it was finished everyone came down to the suite to watch it and the whole team was crying.

The Tagata Pasifika 20 years show was very memorable too. But also, experiencing the many Pacific cultures through our team and programme over the years and learning about those cultures, from drinking kava to seeing an ifoga process, things I would never have experienced had I not been working for TP.

MARAMA: We covered some of the big events in our community; the tsunami that hit Samoa and Tonga, the earthquake in Christchurch. People just open up their homes to you during such difficult times and I’ll always remember that.

SOANA: There have been some heartbreaking times for example, travelling to Samoa and holding babies suffering trauma, attending the King Tupou V funeral in Tonga. On happier occasions, I’ve covered the current King of Tonga’s Taumafa Kava ceremony which is the Tongan traditional coronation ceremony. Oh – and how can I forget the time I interviewed Hugh Jackman!

This year’s theme is #BreakTheBias – what were some of the biases or obstacles you’ve encountered in your career?

SOANA: Nothing really comes to mind but, I did get a phone call once. A Samoan man complained, why did we send a female Tongan reporter to do stories in Samoa? I politely informed him that it was me and he sheepishly apologised and he never called again. I thought that was funny!

NGAIRE: There probably has been some – like being brown with curly hair and not being taken seriously. But I’ve been very fortunate to have worked with some forward thinking leaders who have encouraged and supported my growth within the industry.

MARAMA: In terms of reporting I haven’t really found any but when I think about being a presenter, certainly there are biases if you look across the diversity that’s within the media. We don’t really see many of us that are represented in mainstream media anyway. I think we’ve got a long way to go.

CHARLOTTE: As a woman in a more technical space you need to actually know what you’re talking about instead of making it up as you go along – where a male counterpart needs to know a little and can get away with a fair bit of bluster, a woman almost needs to have a Phd in every single part of the process in order to be heard and taken seriously.

How did you overcome these obstacles?

CHARLOTTE: By learning more, reading lots and talking to people who know more than I do. Tech stuff is constantly evolving and so I try to stay up to date with the latest.

What female figures inspire you?

NGAIRE: The late Puhi Rangiaho, she encouraged me into the industry. I think we’re blessed with strong women leaders like Luamanuvao Dame Winnie Laban and Pacific Islands women in the industry both young and old. It’s constantly evolving and I see the passion and hard work across the board to achieve successful outcomes.

SOANA: My late Mum, Dame Valerie Adams has always inspired me, her courage and strength, and ALL women – especially those who are doing it on their own!

MARAMA: Meeting incredible pioneers like Vesehemana Togiamua who was a pioneer for Niue early childhood education in Mangere. She represents one of the many people who paved the way for our community. So many people come to mind all around Aotearoa but I’m just privileged to have met so many of them in my job.

CHARLOTTE: I think any woman who defies the norm of whatever societal construct they live in and who can stay true to themselves, is inspiring. The person who inspires me still is my great aunt who died at 99 in 2013. She was still living by herself in central Amsterdam in her apartment up until her death. In her later years, living with a brain aneurysm, she would still walk up and down the 3 flights of stairs daily to get groceries from the local supermarket, carrying a tiny back pack for the items she bought.

During her life she was a photographer, a painter, a leather tanner, a plumber, electrician – she did anything and everything and on her own terms. She would drive a car when it wasn’t something women ought to do, she took photos during WWII when you weren’t supposed to, she lived with her best friend while their partners lived in their own respective homes, defying societal norms of being married and having a family.

She was constantly learning and evolving and that didn’t stop. I loved my weekly visits to her apartment when I was a student – we would talk for hours and have lunch together and when I moved to NZ, I called her every week with those international phone cards. She was a rebel and I adored her. I miss her very much.

What advice would you have for other women who want to pursue roles in media?

SOANA: If you have the passion to tell stories, then, just go for it!

NGAIRE: Work hard, find your mentors and support – love and enjoy what you do.  There will be some knockbacks but sometimes these can be a blessing or learning only for you to get it right when the time is right.

CHARLOTTE: Set your boundaries up front so people know when they’re crossing the line. Know your stuff and learn other people’s stuff too. And if you don’t enjoy your work, go do something else.

MARAMA: The only way I think we can overcome [lack of representation] is by getting more of ourselves in this space. The more of us that can be inside the fale where all the talanoa is happening, the better for our community in terms of what’s being represented, especially for us as indigenous Pasifika women. We’re incredible storytellers, that’s part of our DNA!