HomeCommunityMany in need this Christmas 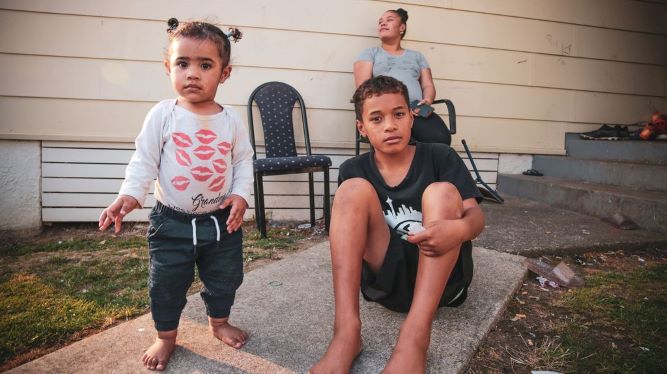 Many in need this Christmas

‘Tis the season to be jolly.

Christmas in New Zealand is usually spent with family at the beach, a backyard barbeque or, if you’re really lucky, out on the boat catching a few snapper or at a bach.

It’s also the time for spending up large to make sure every member of the family gets something with their name on it, under the Christmas tree.

New Zealanders are expected to spend 5.6% more than this time last year, and December spending in 2018 hit five billion. It’s pretty clear we’re getting better and better at spending and spoiling during the jolly season.

But for a portion of our population, Christmas is anything but jolly.

This month, the Child Poverty Action Group (CPAG) released a report which showed, among other alarming figures, 148,000 kids live in households experiencing material hardship – that means going without six or more essentials for a decent standard of living, such as heating, food and decent clothing.

For Pasifika, the situation is dire. The Salvation Army’s latest study into the housing crisis shows 29 percent of homeless people are Pacific (2013 count), 39 percent (over 1100) of Pacific people were living in temporary accommodation in a one-night count, and out of the over 12,000 people on the public housing waiting list, 14 percent are Pasifika.

The Pacific population in New Zealand is severely over-represented in homelessness and emergency housing. One of the symptoms of this housing crisis is the overcrowding that Pacific families are facing.

The Alatinis are one such family. There are 15 in total in their three-bedroom state house.

There’s Vili, a solo dad, and his five children, Vili’s sister, her husband, their children and Vili’s parents.

Vili and his kids all sleep and live in one of those bedrooms.

In that room, there’s one single bed, where his eldest and youngest sleep, and then a mattress that covers the rest of the floor space, which Vili and his other four children share.

On one wall there’s a bookshelf storing a few school supplies and odd pairs of shoes, and on another wall, there’s a TV to keep the kids occupied.

But the lack of space isn’t the worst of it. The house is also cockroach and flea-infested, which makes for a very unhygienic sleeping and living situation. Vili and his family have appealed to their local social services for financial assistance and for help to find another home.

“We tried to move and find a house, and I still can’t afford it, that’s why we’re still staying here.”

Vili applied for a house through Housing New Zealand, but because he is employed full-time and has savings, they told him he should be able to get a rental.

But on top of a full-time job, Vili looks after his kids and parents and is the main breadwinner of the family.

Weekends are spent with the kids at their sports games, and so there’s barely any time to go looking for rentals.

The rentals Vili has looked into prove to be too expensive – the median price for a local rental that fits his family’s needs is around $600 a week, a cost Vili can’t afford looking after five kids on one income. His main concern is giving his kids the space they need to be able to live a normal and healthy life.

“My two youngest get sick the fastest because they were born with asthma. I’m worried because they are all growing, so I want them to have their own space, not squeezed in one room”.

The Alatini family are getting some help through social workers from the Māngere East Family Service Centre. Overcrowding is a common problem that social workers come across when helping Pacific families.

Alastair Russell, one of the social workers helping the family find a house, says the situation affects the children the most.

“I’m absolutely convinced that Vili is a good father and trying to do his best for his kids, but the situation that he’s in makes that extremely difficult.”

The process of finding and applying for a rental also depends on winning over the landlord, which, in the Alatini’s case, is difficult to do.

Alastair says the chances of the family finding a suitable rental are unrealistic.

“What is the realistic chances of a sole dad with that many children knocking on a landlord’s door and saying, ‘I need a house?’ He’s not going to be the first choice of any landlord.”

The Ministry of Social Development’s Auckland Regional Commissioner Mark Goldsmith says the Ministry understands the increased risks with overcrowding and provides support and advice to help these families to find a suitable housing solution.

“We’re currently waiting for the Alatini family to return the information needed to get Tenancy Costs Cover – which will help them access a more suitable housing option by providing a level of assurance to landlords looking to let them a private rental.”

Goldsmith also says that the Alatini family is on the public housing waitlist for a four-bedroom house.

“How quickly someone is placed in public housing depends both on their need and availability of suitable housing matching that need. Those who are housed sooner than the others often demonstrate high and complex needs like serious health conditions, a severe disability, or may be fleeing domestic violence,” he says.

But the Alatini family are just one out of hundreds of families nationwide that are living in substandard housing. For Alastair Russell, the solution lies in our government accepting more responsibility for those in poverty.

“It is not about us as a society blaming an individual for their situation and then saying we have no responsibility,” he says.

“There also needs to be a real emphasis on the social responsibility we all have that ensures that every family, every kid, has a house that is good for them, that gives them a chance to make a future for themselves.”

Every family and every child deserves no less. A warm, safe house, a meal and a bed to sleep in.

While we’re out there battling the traffic and the madness of Christmas shopping this season, let’s think of those who don’t have the same luxuries. Better yet, let’s give to those who are in need, and give abundantly.

COVID-19: How to stay mentally well during lockdown

Pacific aged care workers work through lockdown despite the risk