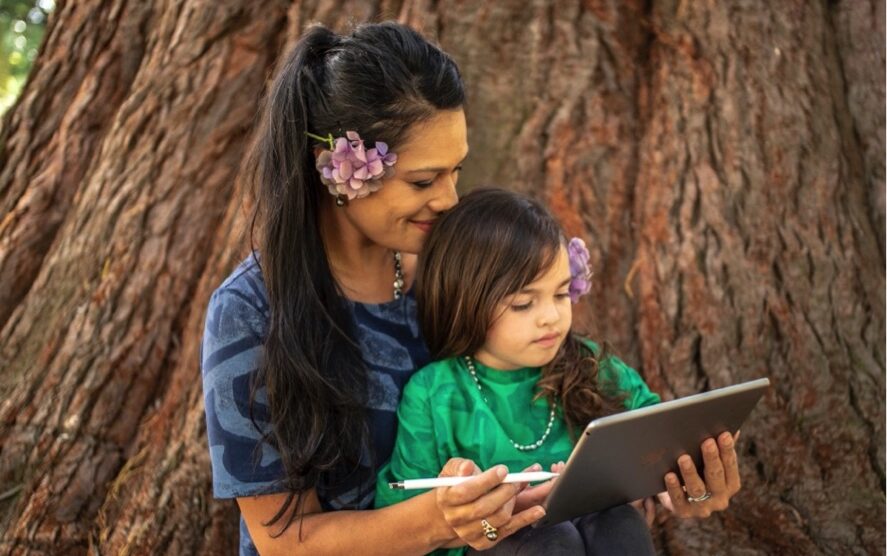 As the first Pasifika woman to ever receive a Mechatronic Engineering degree, Joyana Finch intends to use her platform to encourage Pasifika people to be more technically inclined.

The Mechatronic Engineer and former Miss South Pacific has written her first children’s book, Buzz the Electron. Published online last month, Buzz the Electron follows an anthropomorphic electrical circuit zooming around the house, collecting and losing volts as he passes through batteries and light bulbs.

When asked what inspired her to write the book, Joyana indulges in her earliest memories of having her first daughter, Zarina.

“A career in STEM (science, technology, engineering and mathematics) has brought so much joy and fulfilment to my life personally, so I wanted to ensure the same opportunities for my baby,” she says.

“The books I found were what I thought to be – wonderful. They had the baby colours going on, baby-level diagrams while exploring science concepts. But my little darling just wasn’t interested in what was available. I realised the existing science baby books on the market were treating the audience a bit like university students. The content was very much statements and facts only. It was as if the authors were afraid to have fun with the children.”

Initially, Joyana wanted to create a book only for her daughter, but her thoughts wandered to parents who also want the same opportunities for their children.

“By introducing STEM early, just like we do the ABCs, colours, counting, farm animals etc, the hope is that science and tech concepts will simply be normalised to the next generation, allowing for them to be confident in those areas and move on to a more broad and stable range of career opportunities.”

Joyana says learning about STEM also gives the younger generation the ability and freedom to imagine, design and then build.

“That specific desire ‘to create’ is something I believe to be rooted deep within our Pacific people. Our ancestors were engineers and creatives pioneering around the Pacific on vessels designed and manufactured by themselves. For me to be an engineer almost feels like continuing tradition.”

“Buzz the Electron became much more than just a fun project for me,” she says. “It is a way for me to immediately help our people towards STEM opportunities, beginning with our little ones. Because we know that to reap a good harvest in the future, we have to start planting the seeds now!”

As refreshing as that sounds, Joyana endured two difficult challenges during the process of her writing – the first being relatable to those already fulfilling parental roles.

“Anything that wasn’t housework, meal prep, paid work or toilet training… immediately fell to the bottom of the priority list. In the end, I had to choose to make it a priority. Otherwise, it would’ve stayed as mere sketches forever,” she explains.

“My husband and I started getting up much earlier and going to bed much later to afford the time to address our personal projects. Also, seeing how fast my daughter is growing up and how much information she is absorbing at the moment, I urgently felt the need to have something done soon.”

The other tricky challenge was deciding where to draw the line between science and imagination.

“Choosing a way to metaphorically represent a science concept that is fun for kids but also true to the facts was harder than I anticipated, and I most definitely did not want to ‘mis-educate’ in any way,” she says. “That pressure was nerve-racking throughout the process. Though I believe I struck a balance in the end, and I am very pleased with the result.”

After just a few days of officially releasing her book, Joyana saw Buzz the Electron rise to Number 1 New Release in the Children’s Electricity and Electronics’ category on Amazon.

“I certainly didn’t expect Buzz to be number one,” she says. “It’s been a really lovely surprise… but it’s NOT the goal. The goal is to help our kids gear up for the world we live in and maybe even ignite a passion!”

Joyana aspires to continue her goals by releasing a series of STEM books. Through the use of anthropomorphic characters with bright colours, rhythm and rhyme, she’s confident her books will firmly engage and educate the minds of our younger generation. Another aspect that has already set Joyana’s work apart from others on the market is her acknowledgement of her Cook Islands culture.

“People just really liked the fact that I mentioned Rarotonga in the ‘Message from the Author’ at the back of the book,” she says. “This has moved me to include Pasifika comparisons in the next books. For example, a photon’s wave-like motion can be likened to that of the Rarotonga sway. This would be my way of inviting our Poly people to take part in the tech world while simultaneously introducing ourselves to the rest of the world.”

As we await the upcoming release of her new book, about a photon introducing the science of light, Joyana shares her dreams of having her books available throughout primary schools in the Pacific.

“If that could somehow happen, I would feel like I’ve been able to do a really good thing for our people,” she expresses. “Who knows, maybe someone who can help will see this article and give me a buzz … (pun intended). If there is sufficient demand, I can get the hard copy published here in New Zealand instead of the US, which would be nice. Always trying to help local businesses first where possible, especially in times like these.”

Q&A with the director of Oscar-shortlisted Hawaiian film Kapaemahu