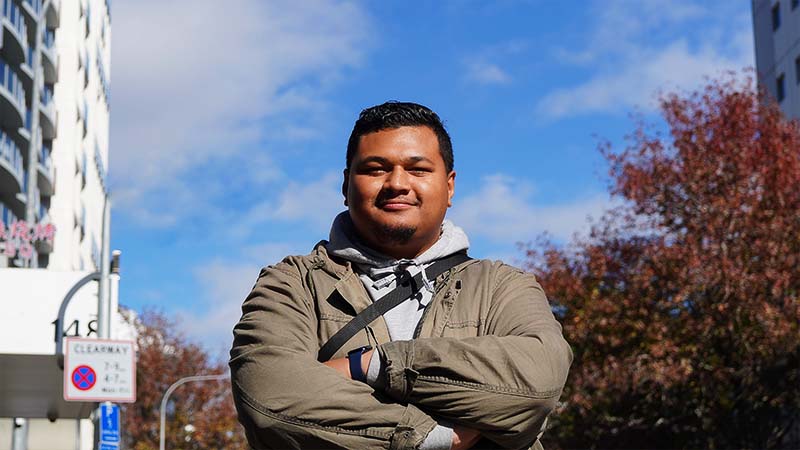 Greeting Christopher Tenisio in the foyer of Auckland City Mission’s new headquarters, it’s clear not much has changed since our first encounter.

Back in 2015, I was working for Pasifika radio network station NiuFM. De La Salle students were brought in to volunteer and perhaps learn a thing or two about broadcasting.

Christopher recalls, “At the Catholic schools here in Auckland you have to do 20 hours of service per week.

We went on to [volunteer at] the Police station, we came with you guys to do Pasifika and Polyfest – I developed my engagement skills, working with people, navigating their space.”

Christopher impressed everyone he met with his inquisitive and respectful nature, earnestness and natural leadership skills. So it was no surprise when it was announced he was appointed De La Salle’s Head Boy the very next year.

He continued to volunteer during his university years because, “they said if you volunteer, it looks good on your CV,” he laughs.

But as he continued to volunteer through St Vincent de Paul, he found that his passion for working with Pasifika communities and youth grew.

It’s led him to where he is today, Auckland City Mission’s first ever Youth Development Worker.

At the time of our interview, Christopher was only 5 days into his new role. But before his new appointment he had been a part of Auckland City Mission’s Outreach team for over a year.

His team leader Wendy says Christopher is “very passionate and committed to his role, but I think his heart has always been with youth.”

He stood out as the perfect candidate due to his passion for working in the community and enhancing the lives of our rangitahi.”

Almost every day, Christopher and the team are connecting with people sleeping on the streets, taking the time to build a rapport with them and earn their trust.

“[We] slowly bring them into the mission, offer them emergency housing or housing,” he says.

“We offer them you know, do you need ID? Are you looking for work? Do you need clothes? Food?”

We also offer food every day as well so yeah, amazing services here.”

While helping others overcome their own obstacles, Christopher shares he has had his fair share to face.

“Every day you go in with a plan. Sometimes that plan doesn’t work out…and over time, you feel like you’re not doing enough.”

I do have moments where I’m like, actually, is this space for me? Am I supposed to be here?”

However Christopher is optimistic and says while he is somewhat new to the role he has already seen a small impact on the people he has helped.

“When someone has made so many strides and achieved so many goals and they’re in the position to actually be like, ‘Hey bro, I don’t think I need your help anymore. I think I’m in a space where I can do it on my own.’ That’s happened to me once and it was the greatest feeling in the world.”

Lāuga: the guide book to understanding Samoan oratory and culture