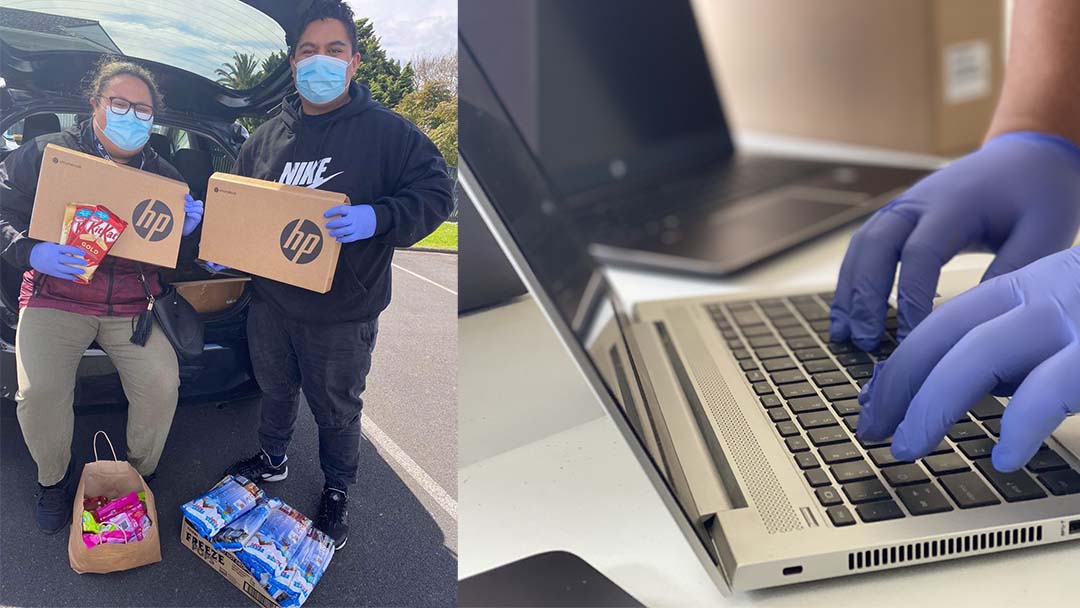 Many Auckland students would be feeling the strain of the extended lockdown, and there’s no doubt many of them weren’t prepared for it either.

Advocate for Pasifika in Tech Eteroa Lafaele has been working diligently behind the scenes to deliver much needed laptops to Pasifika students through her project DigiTautua.

“I got the call from one of the community leaders in Porirua,” Lafaele says.

“They hit me up and said, ‘Hey, I think it’s the same in Auckland too, but we need help.'”

Through her former workplace OMG Tech, Lafaele was able to send down a few laptops to her Porirua community. But it did get her thinking — how were Pasifika students fairing tech-wise?

She teamed up with the Ōtara Kai Village and posted a call-out asking for students who needed laptops for distance learning purposes.

Within three days, 700 students had answered the call. “We had to close it because it was, is still growing,” says Lafaele.

“Kids either had no device, or they’re a family of 10 and they only have one device, and it’s their mum’s work device.”

“These kids, they’re very honest. A lot of them say if they’re not doing any schoolwork, they just sit there and watch TV, because they can’t do anything about it.”

“It’s because of that poverty. And we understand, you know, you’ve got to choose the rent.”

In April last year the Government announced it would contribute $87.7 million to funding distance learning. Part of that funding was allocated to provide laptops and modems for students. But due to a shortage of equipment in the country and globally, many students didn’t receive their distance learning packages.

“One of the worst stories I’ve heard is with Sir Edmund Hillary College. They made an order from the Ministry of Education (MOE) of 300 laptops in Feb,” recalls Lafaele.

“They’ve only received 50. They’re in September now, and they still haven’t received anything.”

“I’m very aware that there’s also a backlog with distribution, but the call has been done for such a long time, and it hasn’t been done well.”

Lafaele adds other schools also reached out early to MOE and experienced the same the thing, yet are still criticised for being ill-prepared to school from home.

“I hear a lot of people say, ‘It’s the second time we’ve gone into this, why weren’t you prepared? Why weren’t you ready for this?'”

“While people are all ‘be prepared, be prepared’, families were struggling in that time period before they got to this lockdown. So this lockdown is even a bigger obstacle course for our families to get through.”

Lafaele used data collected from the call-out to explain the need to fellow tech companies.

“Ever since I’ve been in tech, I’ve always known about organisations that give out devices to the community, and they’ve been doing it for a few years,” explains Lafaele.

“But lockdown just – tulou – really pissed me off, because these guys get paid to do this job and they get paid to go out and find the resources to help our community.”

Since the start of DigiTautua’s campaign to ‘bridge the digital divide’, Lafaele and her team have received donated laptops from individuals and corporate companies, which she usually refurbishes and resets upon arrival.

“The need is usually just a Chromebook, nothing too fancy, because they need something just to connect with Zoom and also a browser.”

“Sometimes people go, ‘What about licensing them with Microsoft Office and stuff?’ But a lot of [students] use Google or G suite, so it’s pretty sorted.”

Lafaele is currently working with schools, assessing which year groups have been covered with laptops, and supplying the need where she can.

She also works with the families too, some of which have language barriers and don’t understand how to ask for help.

“I’m quite fortunate. Some of the Samoan families, I communicate with them in Samoan and tell them, this is what we’re going to do. But we also have other other team members who are fluent in Tongan and also Niuean to help us with the comms.”

Lafaele has set up a Givealittle page to help purchase new laptops and a website for people who’d like to donate a laptop instead.

“Relationships are being built with [companies] to deliver 45 laptops or even 50 every month to help.”

“When we move on out of Level 4, we can still try and help bring their digital divide in a bit, because we don’t want it to be a one-off; we want to make sure that we can do the best that we can and in the future as well.”

Visit the DigiTautua website to donate a new or used laptop.

To apply for a laptop, email [email protected] You will need to provide the following information:
Name:
Last name:
Age:
Address:
School:

Pepeha: The unique Māori way of introducing yourself