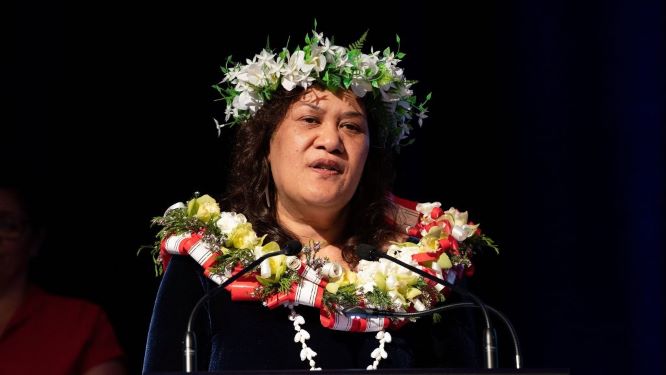 The 2019 NZNO Award of Honour was presented last week to Porirua-based Pacific Nurse Sipaia Kupa at the NZNO Awards Dinner in Wellington – the most prestigious award from the New Zealand Nurses Organisation.

The Award of Honour is given to an NZNO member who has made a noteworthy contribution to the work of NZNO and has had a positive impact on nursing in Aotearoa New Zealand.

Ms Kupa is a New Zealand-trained registered nurse of Tokelau, Cook Island and Tuvalu descent. She has worked mostly in Wellington at Capital & Coast District Health Board (CCDHB) and amongst the Pacific community. Her roles have included being a lecturer on the Bachelor of Nursing Pacific programme at Whitireia; Psychogeriatric speciality nursing, and working as a duly authorised officer with the Mental Health Crisis Resolution Service. She currently works as a Senior Systems Development Manager for Pacific Peoples at CCDHB and, since 2015, has contracted to the Nursing Council as a Professional Development assessor.

She has been an active member of NZNO’s Pacific Nursing Section and her nominators say her passion for progressing the profile of Pacific nursing is evident in her numerous involvements at a leadership or governance level in various community-based organisations outside her regular work.

Sipaia says she is thankful to the Pacific Nurses Section for her nomination and to NZNO for the award. She regards this as an honour and wishes to pay tribute to her family and the great teachers she has had who have supported her work and service to Pacific and non-Pacific communities.

Awards given for Service to Nursing or Midwifery

Through the tripartite agreement between the Niue Government, Counties Manukau Health and the New Zealand Agency for International Development she held nurse-led clinics in Niue Island annually from 2007 to 2016. She is a founding member and Chair of Penina Health Trust (2001) which provides mental health and addiction support services and transitional housing in South Auckland. NZNO has given the award in recognition of Angeline’s wonderful services to nursing and Pacific communities.

Angeline says: “I am very honoured to be given this award and would like to thank NZNO and the NZNO Pacific Nursing Section, Counties Manukau Health, all the Pacific nurses and the people of Niue here in Aotearoa and Niue Island.”

First Samoan woman to graduate with a PhD in Architecture