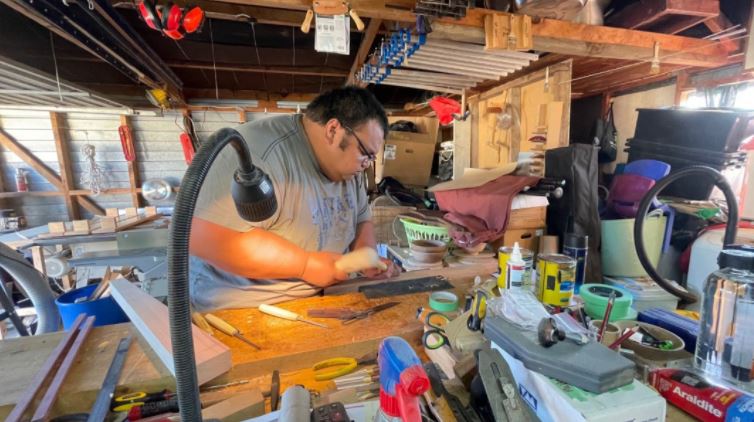 His family, and the fear of losing knowledge gained over many years is what inspires the proud Rotuman wood carver Rocky Ralifo (pictured) to create beautiful traditional artwork inspired by his culture.

Hailing from Rotuma, but born and raised in Fiji, Rocky studied Environmental Science at the University of the South Pacific before moving to Rotuma to teach for a year.

Fifteen years ago, Rocky relocated to New Zealand where he works as a Network Operations Engineer while also running MCR Woodworks on the side.

“I started my woodworking side business about eight years ago and have been back to carving now for the past five years,” Rocky explains.

“It is my past and my future which has motivated me to return to carving – this is knowledge I will pass on to my daughter and anyone else willing to learn.”

As a youngster, Rocky says he was the shadow of his maternal grandfather Aisea Anise, who carved and was a carpenter.

“I followed him everywhere and learnt all I know from him, and at high school, I kept a small notebook of little tips and bits of information, which I would go over with my grandfather.

“I have now transferred this information to a sketchbook as the old notebook deteriorated from years of poor storage.”

For the first time this year, the Ministry for Pacific Peoples has introduced the Language Champion Honours as part of the Pacific Language Weeks series.

The Language Champion Honours recognise people who contribute to, and are committed to nurturing the Rotuman language, culture, and heritage.

To’a is a term used in Rotuma to describe people who showcase strength, endurance, hard work, perseverance, and resilience, so the Rotuman Language Champion awards ceremony, staged on the final day of Rotuman Language Week 2021 (May 15), was named the To’a Awards.

Rocky was approached prior to the awards to carve trophies for the three awards: Le’ Haharągit (Youth); Fāat (Male); and Hąnit (Female).

He says it has been a great experience to carve the Rotuma-inspired trophies as Rotuman Language Week is something he sees as important.

“It means a great deal to me as a Rotuman – we have a small population, and our language is endangered language.”

There is a hunger and drive to keep the language alive, just as he wants to keep the tradition of wood carving thriving, he adds.

Rocky is grateful for the opportunities he has been presented with to learn about the Rotuman culture, and he wants to offer the same experiences to young Rotumans in Aotearoa.

“Any Rotuman youth who wishes to learn carving Rotuman items are most welcome to connect with me,” he says.

“I want to thank the many people that have helped me on this journey and continue to do so, the Lord for giving me the strength, will and courage to open that tattered notebook and never look back.

“Lastly, to the old man that explained things to me in Rotuman metaphors, growls, mumbles and jests.

“Rather than explaining, he further showed me how to do things by doing.

“I am forever indebted to him for those times of learning – alalum ma kikia famör Rotuma.”

By the Ministry for Pacific Peoples

Tongans garden for their community