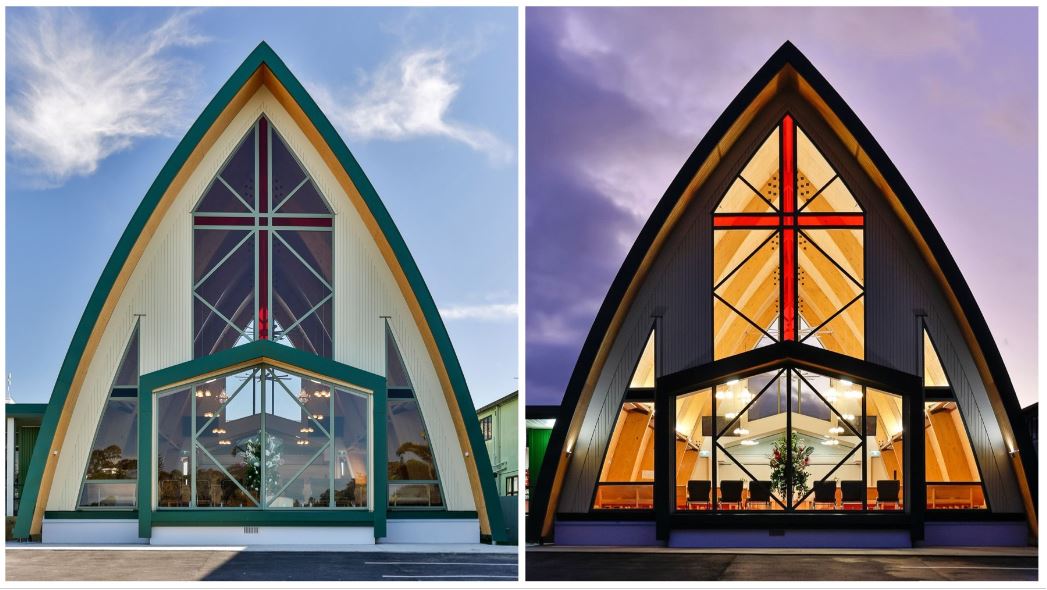 The judges commented: “The Tuvalu Community Church rises up to meet a sky alive with Pacific colour, life and aspiration. Established in West Auckland in 1992, this church community has envisioned its new building for 28 years. The fruition of this project is an act of devotion by the Tuvaluan community and, in response, the architects have designed a building that is centred in faith and celebration. Taking cues from the fale uma or kitchen fale, the church form elegantly opens up and out into its industrial context. The church is a metaphor for the community’s resilience and ambition, which soars within this timber and steel vault.”

The Church also won the Resene Colour Award for its category, with judges saying: “Alive with Pacific brights on the inside, the outside of this building features green tones selected by the community it serves.”

The church in Henderson is the home of New Zealand’s first Tuvaluan Christian congregation. Decades in the making, the church opened last year, coinciding with Tuvalu Language Week 2020.

As Bill McKay writes for Architecture Now, Tuvaluan architectural graduate Ben Kofe developed the initial concept. “After a lot of fund-raising and a new pastor, Tomasi Iopu, picking up the task, South Pacific Architecture was approached to progress the project and came up with a vaulted form.”

Jacobson Projects was tasked with the construction, with lead builder and foreman Maxi Malama at the helm.

Photos taken during the building show the precise skill and effort that went into the design and construction of the church, with its corrugated iron roof on timber arches.

McKay says: “It is the glue-laminated-timber vaulted space that makes this place special. The portals are reminiscent of the ribs of boats and that isn’t coincidental; the boat has long been a Christian symbol, and the term ‘nave’, for the body of a church, is derived from the Latin word for ship.”

“This is not just a church, one of Christianity’s symbolic boats, but a Tuvaluan vaka as well: a vessel nurturing Tuvaluan community, culture, heritage and coming generations on their voyages to who knows what is next.”

Thank you to Maxi Malama and Jacobson Projects for sharing the photos.