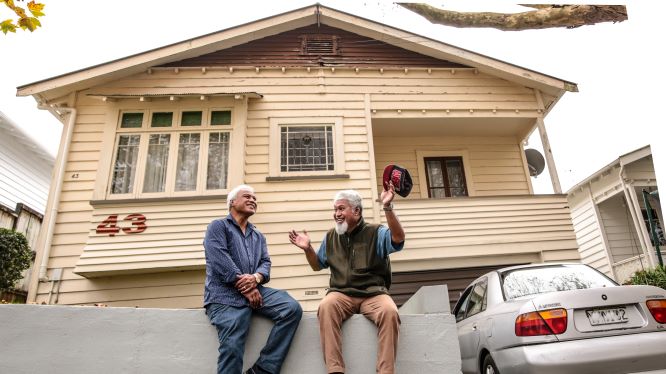 Many of our Pacific families lived in the central Auckland suburbs of Grey Lynn, Ponsonby and Newton from the 1950s-1980s. Although most of these families have moved on to other parts of Auckland today, their original homes in central still hold precious memories about life in New Zealand’s first Pacific urban village. Tales of Homage is a series profiling these special family memories and the homes they were made in.

Forty-three Francis Street was empty. There was a bucket in the doorway filled with a few mops and brooms. All the furniture had been removed. The cupboards had been cleaned out. But, although photographs and precious memories had been packed away from window sills and shelves, the home didn’t look bare. The walls were still covered in that decorative ‘60s wallpaper with floral flourishes and a peep show of charming wooden moulding on the edges.

Pa’u and his brother Fatu were at the back of the house on the deck, using a cardboard box as a table and were enjoying one last drink on the grounds of their family home.

“Well, I remember that weekend when the parents moved here. I was away doing rugby league representing Auckland Rep,” said Fatu. “We came from a two-bedroom flat at the top of Surrey Crescent Shops. Then we came here and had our own rooms… Well, Pa’u and I shared because our older brother Tausi had his own bedroom. But it was a big house in those days, big dining room, big lounge.”

The three brothers moved to New Zealand with their parents in 1967. Their father, Pisisami Tausi, a Tuvaluan, met their mother, Solo’au Tausi, in Samoa when he went there after the Second World War. Their father had an uncle already living in New Zealand, who sponsored him to work here for six months in 1965. Pisisami eventually relocated his family to Auckland two years later.

Forty-three Francis Street was purchased for $9000 and took 10 years to pay off.

“We were put back to the primer, you know, the beginning with preschoolers. So I was 8 and we were with 5-year-olds. Just to get our English up to scratch. There were about 10 or 12 other Pacific students in our class too,” Fatu added.

They both say they had a happy childhood in Grey Lynn.

“My father wasn’t too keen on Guy Fawkes Day. We were letting off crackers down in the garage and blowing up figurines. We thought it was hilarious. But when the old man came down and saw crackers flying everywhere…

“He was so angry,” Fatu jumped in. “He never hit us or anything. But I thought he would. It was his demeanor… Boy, we knew he was angry because he wouldn’t talk to you afterwards.”

“I remember the rattling sound of Mum’s sewing machine when we were sleeping,” Pa’u recalled. My mother was a really good seamstress. She had a Singer, but it was a pedal one, and it would go like this all the time…” Pa’u laughed and mimicked the forward and back motion of the Singer foot pedal.

“…I remember the ladies from church, they would all come here. She used to be busy sometimes, but she never refused them. She worked late at night until two or three in the morning, especially for White Sunday, trying to finish their dresses,” said Fatu.

“Even for weddings. They just showed a picture and she would make it from that.”

The three brothers lived in Francis Street until they got married in their early 20s. They talked through memories like their mum’s Sunday tona’i’s and their dad’s famous raw fish with chilli, the Grey Lynn RSA Friday band nights and celebrating birthdays in the house.

Their father passed away 10 years ago, and with their mum’s passing in October 2018, the brothers decided it was time to sell and split the money between them.

“One of us would have liked to live in the house, but it’s just too expensive. Their legacy for us was the house, and now we can help our families,” said Fatu.

“I’ve had a few tears, just talking about it. It really hits home what 50 years is about. To me, it was just like yesterday, and now I’m nearly 60 years old. Jesus, it’s quite easy for me to just see my parents walking around here in shadows.”

Have you got a story to tell? Nominate your family for the Tales of Homage series – email taylor@sunpix.co.nz