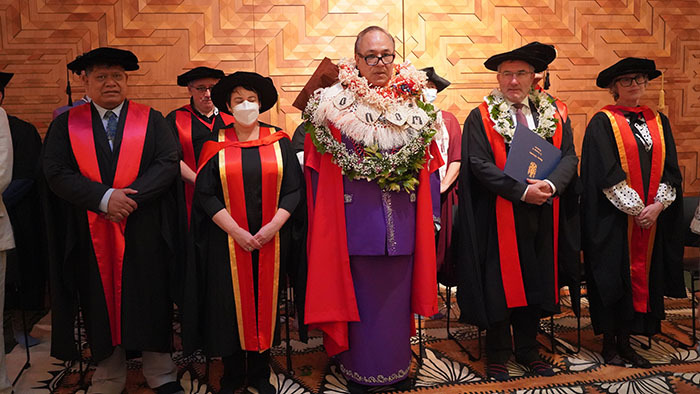 Veteran health consultant, academic, registered psychiatric, general and obstetric nurse Fuimaono Karl Pulotu-Endemann is the first Pacific person to receive an Honorary Doctorate in Health from Massey University in recognition of his outstanding service and contribution to the health of Pacific people. A special ceremony was being held yesterday in Wellington to recognise Fuimaono’s achievements in the health sector.

He is known for his strong advocacy for Pacific people at governance level and has long contributed policy advice, leadership and governance across a high number of local, national and international health and social services.

Fuimaono is a role model and a strong advocate for fa’afafine in New Zealand, the Pacific, and the world. He was one of the first openly fa’afafine employees in the New Zealand public service and he has dedicated most of his life to standing up for fa’afafine voices and rights.

Massey University Chancellor Michael Ahie says Fuimaono Pulotu-Endemann’s contribution to Aotearoa Pacific people has been immense. “Fuimaono is a respected educator, a trailblazer and an exceptional individual who has used his cultural background and broad and relevant professional and academic trajectory to serve and represent Pacific people in Aotearoa New Zealand.”

“Recognising Fuimaono’s service to health, the Pacific community, and to Rainbow Pasifika aiga speaks volumes for the lives of people and communities he serves in Aotearoa. His service and leadership has been exceptional. Bestowing him with the Honorary Doctorate in Health at a special ceremony challenges us and encourages us to give our very best and inspire others to do the same.”

Massey University honorary doctorates are awarded to individuals of distinction who have made a significant contribution to the university, the nation, or the public.

Samoa’s resilience a feature of last 60 years of Independence