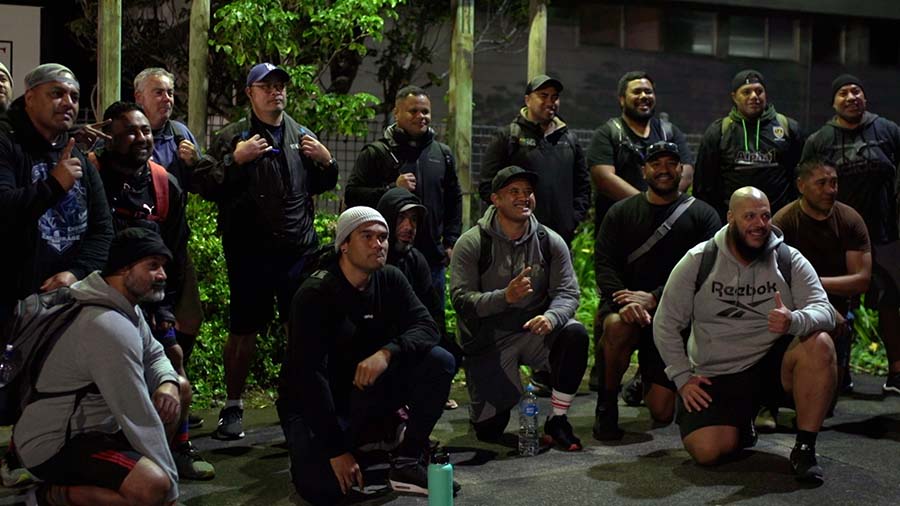 The group recently completed a 45km walk around Auckland to mark the end of a five-week walking challenge. The challenge saw around 60 participants from across the country and the Pacific taking part.

Leader Sio Laumatia said the walk gave the men an event to work towards and a chance to explore their own backyard.

“We had guys who lived down the road from Mangere mountain who had never been up [there], and so taking them up these peaks was an introduction to their backyard, what’s been here all this time.”

The group was initially made up of youth workers trying to stay active during the first lockdown in 2020.

Laumatia later expanded the group into the wider community and called it ‘Brothers Keeperz’, which has since completed three challenges.

Each challenge has ended with an endurance walk that has progressively added more climbs. The first was called ‘5 Peaks’, and a challenge earlier this year culminated with seven climbs.

“The funny thing was you had guys who had done no walking whatsoever clock up 200km, 300km in four weeks.”

Laumatia also created the final walk to make beginners more comfortable about participating in an endurance event by walking alongside men in similar circumstances.

“The thing is, you rock up to these events, and people look at you and be like ‘are you guys alright, are you guys looking for the rugby stadium?’

“But you know, the thing is – the joy that came from it at the end, you know, was just overwhelming, and the thing is, that’s what I want for our people to experience.”

But conquering mountain peaks is not the sole purpose of the walk, it also gives the men an opportunity to learn more about each other, especially the new members of the group.

“You know, just walking and talking, you are able to share stuff quite deeply without having to try. Things just come out freely rather than being in a room – it’s like going to one of those AA meetings,” Laumatia says.

Pat Iopu Mose, who walked over 200km during the challenge, says that connecting with other members during the final walk is “awesome”.

“You just get to hear their journeys and what they’ve gone through and some of the struggles they’ve had to get through as well, and it’s really encouraging.”

Mose says there were moments during the walk where he wanted to give up but owes his completion to the group camaraderie.

“The support, conversations, and hearing everyone’s journeys is always a really good thing. It was amazing, and the support and the encouragement from all the brothers as well is powerful,” Mose says.

The next challenge is slated for October, with plans to increase the final walk to 10 peaks.

Talanoa: Pacific language weeks and what to expect in the budget for Pasifika