HomeCommunity‘We are visible, we are valued and we do belong’: K'aute Pasifika CEO Leaupepe Rachel Karalus on Hamilton’s new Fale 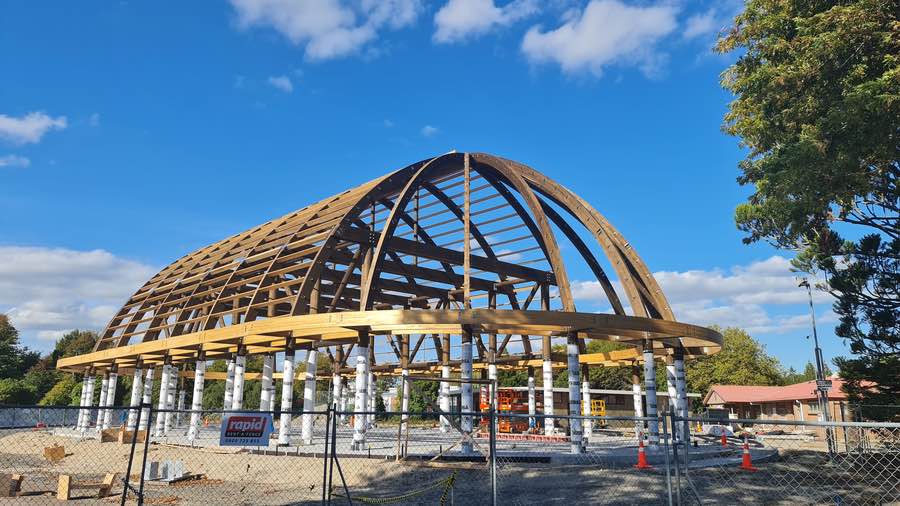 ‘We are visible, we are valued and we do belong’: K’aute Pasifika CEO Leaupepe Rachel Karalus on Hamilton’s new Fale

The creation of a pan-Pacific community fale or hub in Hamilton, set to be completed later this year, is just one of the highlights for the team at K’aute Pasifika Trust amid the global pandemic.

In 1998, K’aute led by former CEO and founder Leaupepe Elisapeta Karalus alongside members of the Hamilton Pacific community, spearheaded the work towards the creation of their own fale.

In 2020 the dream started to take shape with a boost from the government’s Provisional Growth Fund to the tune of $8 million to help support the purpose-built facility. The project has been in the pipeline for more than two decades to support the growing Pacific population in the Waikato.

Continuing the work that began more than 20 years ago by her mother, CEO Leaupepe Rachel Karalus says it has been a long journey and humbling to see the dream come to fruition. She acknowledges the support from across different sectors, government agencies, local government, and from local MPs.

“I think what it means for us, sends a clear message to our people. I really believe the message and meaning we take from it is, ‘we are visible, we are valued, and we do belong’.”

The Fale was developed on the vacant Hamilton Stadium Bowling Club at Hinemoa Park. Situated on Hamilton’s west town green belt, Leaupepe pays tribute to the forefathers who made sure it was a dedicated green space in the heart of the city.

“For us to have permission to proceed with that, on that piece of land, is such a privilege. And there is a massive responsibility that is attached to that in terms of taking care of it, valuing it, respecting it, and making sure that the whole community has access to it and is able to celebrate.”

And while the team at Ka’ute are excited by the capital project, Leaupepe says it is only part of it. “What excites us the most is what we get to be able to offer our community inside it.”

Leaupepe says one of the outcomes for them is how to deliver GP services in a way that meets the needs of the families that they serve. She says one of the key points is it does not look like the traditional practice model.

“It’s about tipping that model on its head and really listen to the people and make sure that services are accessible, that they are culturally responsive. And that people, whole families are able to be seen, as opposed to the individualised approach that a lot of mainstream services take.”

K’aute continues to provide health, education, employment, and social services to Pasifika communities and all other ethnicities.

Ensuring the health and wellbeing for not only the community they serve but also their staff is at the forefront of their work.

Leaupepe acknowledges they have had their fair share of challenges over the past two years dealing with the impact of Covid-19. She is proud of her team who have continued to show resilience during an unprecedented time in the work life of K’aute.

“We have a team of dedicated passionate people who are here because they believe they have a God-given purpose and very values-driven and absolutely committed to supporting the families that we serve.”

Leaupepe says the underlying faith of the team has sustained them on a daily basis. She believes that it is this faith that was put to the test for many Pacific people in the community which led to debates and talanoa over the choice to vaccinate, receive boosters, and mandates as well as the issues around child vaccinations.

Leaupepe recalls it did take a toll on the community, “I think that for faith reasons people who struggle with vaccinations and mandates put a lot of strain on their mental wellbeing.

“We ourselves had a beautiful staff member who really struggled with being mandated. It’s not just about those being anti-vax. I would say there are people who have legitimate reasons for not wanting to be vaccinated,” says Leaupepe.

However Leaupepe is very clear that while Ka’ute respects the views of people in the community, she notes that as a service provider they want to be an exemplar of health; protecting their staff and the people they work with, while promoting vaccination.

Consultation with the community is key for Ka’ute. Leaupepe says they continue to talanoa and listen to what the community needs. She says in preparation of the new fale, they will be running a host of community fono to keep the community updated on developments. The fale will incorporate an integrated wellbeing service, with an early learning space.

Leaupepe says the fale will have something for everyone. “It’s an opportunity for us to talanoa to our families, listen to our matua and to really take on board what they say is needed.”

“At the end of the day what we really want is for the community to take ownership of it … when we talk about the fale, we try to make sure the whole thing is designed and reflected in a way that every Pacific group can identify and see themselves in”, says Leaupepe.