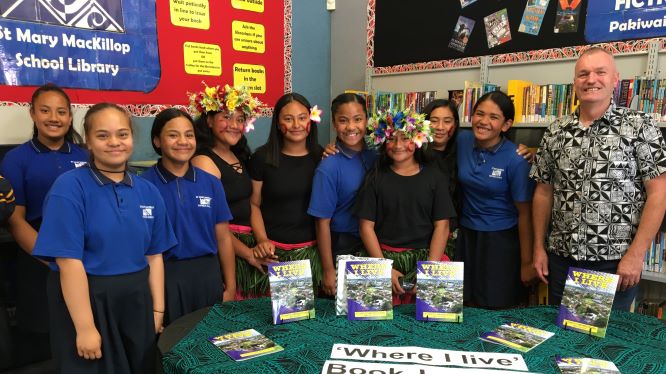 They say a picture is worth a thousand words. This is true for the 11 students who captured a glimpse of South Auckland in a new book titled Where I live.

The Year 8 students, from St Mary Mackillop Catholic School in Māngere East, published their first book this week, sharing positive stories and memories about their hometown.

The young writers teamed up with award-winning writer and teacher David Riley to write the book. It’s a project that 12-year-old Meleane Tafuna was proud to feature her family in. She writes, “Sounds of home. Mum’s soft soothing voice singing my baby sister to sleep, then the clink and clank of the dishes as she cleans them.”

The young Tongan grew up in South Auckland, a neighbourhood she is proud of. “We are so strong in culture and the community is so close and even if we are strangers, we find a way to become friends”.

The group of Pacific authors want to change the negative stereotypes associated with South Auckland because it is seen as a place of crime, violence and a dangerous area. “We all have our faults and we also have good things, we are just as good as the rest of the country” she added.

Meleane wants to become a paediatrician one day to help her family, but for now she is enjoying being an author.

Another proud South sider is Mary-Jane Taito, who dreams of becoming a member of parliament in the future, but while at school, she will keep sharing positive stories about her community. She writes in the book, “Our street is small and I love that, because it doesn’t take long to get to know everyone.”

Mary-Jane says her neighbours are like family to her. “I feel like it’s a safe place to live and everyone is equal.” She wants others to experience South Auckland for themselves and not to be influenced by what they see in the news, because there are people doing good deeds every day.

The students launched their debut publication (37 pages long) at their school Wharenui, and invited their families, school mates and teachers to attend.

The book will be available at the school and the students hope other South Auckland schools will be inspired to tell their own stories.