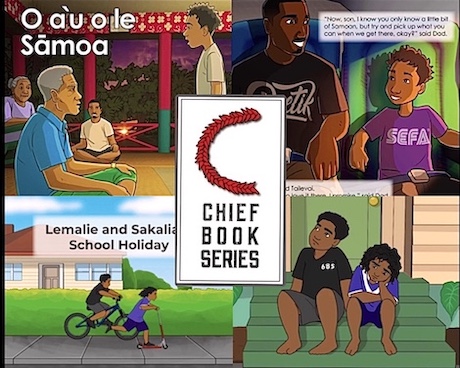 Samoan author and founder of Chief Book Series Tony Laulu is on a mission to increase the representation of young Pacific Islanders in children’s books.

“My boys weren’t coming home with any books that had characters representing them, so I made it my mission to increase the representation of our young people,” he says.

Tony’s first book, Lemalie and Sakalia’s School Holiday, was released earlier this year with the help of language funding from the Ministry for Pacific Peoples.

“The idea was just to create one book to satisfy the obligation of the funding,” he says. “As soon as I knew that I wanted to create more than the first initial book, I wanted to establish a bit of a brand that the following books could fall under. That was the birth of the Chief Book Series.”

Lemalie and Sakalia’s School Holiday is a bilingual book that tells the story of two young brothers on their way to pick up their friends for a day out at the park. Along the way, they find their friends pre-occupied on their electronic devices.

“When I was growing up, a lot of my childhood was spent outside,” Tony says in a recent interview with Spark Foundation.

“I guess I just wanted to tell that type of story to sort of remind parents and also children that there is so much that you can learn from being outside and connecting with friends.”

Tony worked closely with illustrator Tomasi Greentree to capture the authentic essence of tagata Pasifika. The two main characters of his book are in fact inspired by his two sons.

“One of the things that I wanted to normalise was our Pacific names.”

“I was tempted for a bit to give them Palagi names like John or David to make it easier for the reader, but I was like, nah man, they’re just gonna have to learn how to say his name. Sakalia is also my dad’s name, so it’s special to have this family name incorporated in this book.”

For his youngest son’s character, Lemalie, Tony made sure all his physical features were illustrated accurately.

“There were two things that I needed to represent in [Lemalie] in the book,” Tony says.

“One, his beautiful dark brown skin tone. Two, his long curly hair. Why? Because you don’t see too many boys in kids’ books with long hair. Normalising that through this book was important. Skin tone? Because being labelled blacky and dark was something I was called a few times growing up, and it always came with a negative connotation.”

In early June, Tony released his second book, O a’u o le Samoa with a profound theme of cultural realisation and identity. O a’u o le Samoa follows a young boy who travels to Samoa to visit his Papa and Nana. Upon arrival, he realises he does not understand or know how to speak the language. He later receives an unexpected identity lesson from his Papa.

“But also an experience that a lot of Samoans who grew up in New Zealand have had. The feedback has been exactly what I thought: relatable and emotional.”

The illustrations in O a’u o le Samoa bring pure nostalgia for those who’ve visited or are from Samoa. One pictures shows passengers boarding a boat while carrying their luggage, with some walking bare feet in the heat of the sun.

Another picture shows a pick-up truck taking the characters home. On the side of the road is a man walking shirtless in his ie lavalava while lifting a wooden branch over his shoulder. One side of the branch holds a weaved basket, and the other is holding coconuts wrapped tightly together.

“The intent for some of these stories is to really draw out a connection, emotion or experience that is close to the reader’s heart,” Tony says. “We made sure we had the story and illustrations that you as the parent will have an emotional attachment to. One of those IYKYK type approach to it.”

Tony’s books also incorporate Pacific Islander celebrity names or brands on to subtle objects within the pages of the book.

“I want our kids to familiarise themselves with our own people’s logos, businesses, and projects,” he says.

“It would have been easy to leave the T-shirts and images blank or have other more recognisable brands on there, but I have always been an advocate for our own first before anyone else.”

“Spark Foundation has been a massive supporter of the digital discipline movement,” Tony says, “They were generous enough to purchase a couple hundred books from me to distribute to schools, communities and families that would otherwise not have been able to afford it.”

For an innovation that just started in 2021, the Chief Book Series has grown successfully and received a huge amount of support from families, friends and supporters near and far.

“Creating the Chief Book Series [has] put me in a position where I had a commitment to create more books for children and families,” Tony says.

“I hope that through these books,… we can continue to improve our Gagana Samoa and in turn increase our pride and commitment to our roots.”

You can purchase any of Tony’s Chief Book Series’ books here.