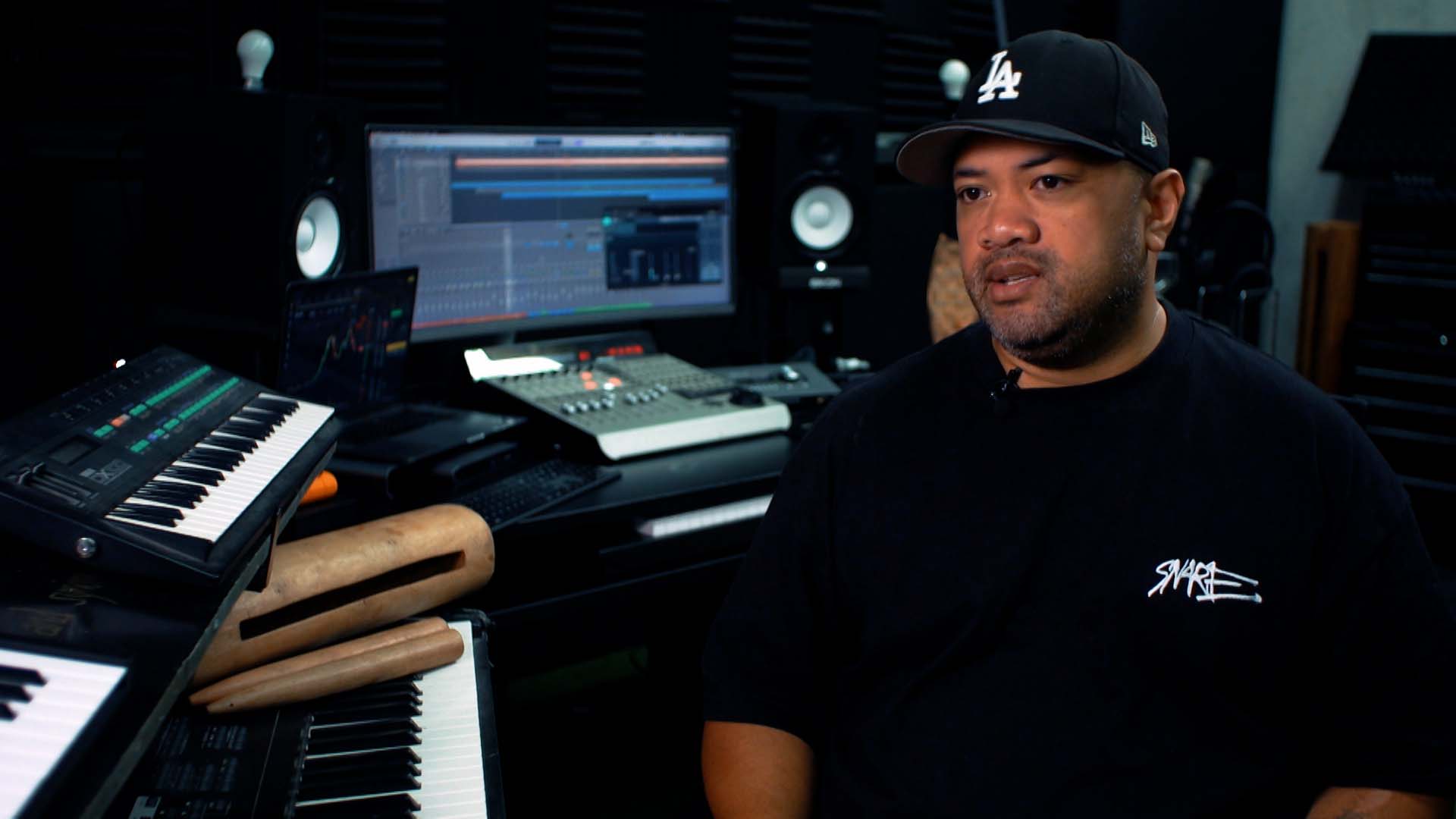 In 2014 producer and artist Faiumu Matthew Salapu – also known as Anonymouz – was doing sound design work at Radio 531PI and NiuFM when he decided he needed the  tapping sound of Samoan tatau-making for one of his jingles.

“The Aganu’u Fa’a Samoa 101 lot said, ‘hey, McAuley and De La Selle have got something on at MIT, a live session, you might want to go along to that and record the tapping’,” he says.

Anonymouz says he went along and, as the session concluded, the Tufuga (traditional Samoan tattoo artist) questioned him about whether he carried the Pe’a, to which he responded, “no.”

“He was like [to me], ‘I respect that people in the arts industry will respect your work but to you it’s just a sound, to us it’s a feeling’ and that cut me to my core,” he says.

Without hesitation, Anonymouz accepted the challenge to turn the sound into ‘a feeling’ and in 2015 was granted the honour of receiving the traditional Samoan tattoo known as the Pe’a.

“Most people get it done for cultural reasons, family reasons or to make their grandma proud,” he says.

“I got it done purely for artistic reasons because I wanted to know how it felt and so I could have a really good idea on how it sounds – a different context to the sound.”

Anonymouz documented and recorded his journey with microphones over seven sessions with a view that, later on, he’d be able to build a project out of it.

“When this opportunity came up to create Resample Tatau and when I was approached by Massey University as well as Tāwhiri New Zealand Festival of International Arts, I was like, ‘ok this is the time to build this’,” he says.

Though the experience required a lot of physical pain, it also provoked a deeper learning for Anonymouz.

“If you try to fight this pain, you’re not going to survive it. You need to, ‘ia kali le au’, lean into the pain,” he says.

“I was like, ‘okay that’s the physical part, so what is the philosophical lesson as an artist that I’m building around it?’”

Anonymouz realised it was the emotional equivalent to that, meaning, to confront the painful things within.

“Tatau teaches us that when painful things pop up, you don’t run from them but you lean into them, because that’s where you get the growth, that’s where you heal and ironically, metaphorically, have an identity after leaning into the pain as opposed to running away from it,” he says

“So that became the philosophical foundation of which the work now is being built.”

Scheduled to premier in early March, ‘Resample Tatau’ has had to be postponed due to crowd size restrictions. However a limited capacity streaming event will take place on March 9 with a view to a premier when restrictions are lifted.

Despite the changes, Anonymouz is keen to share the learnings from his journey.

“What I want people to take away from this, is this idea that we grow from confronting pain. Like the world is going through such a painful time at the moment,” he says

“I think every area of society, world industries and governments can learn from this amazing process that is Tatau, and really that is what I’m trying to create in this project.”

Children’s vaccine rollout out could do with boost in schools