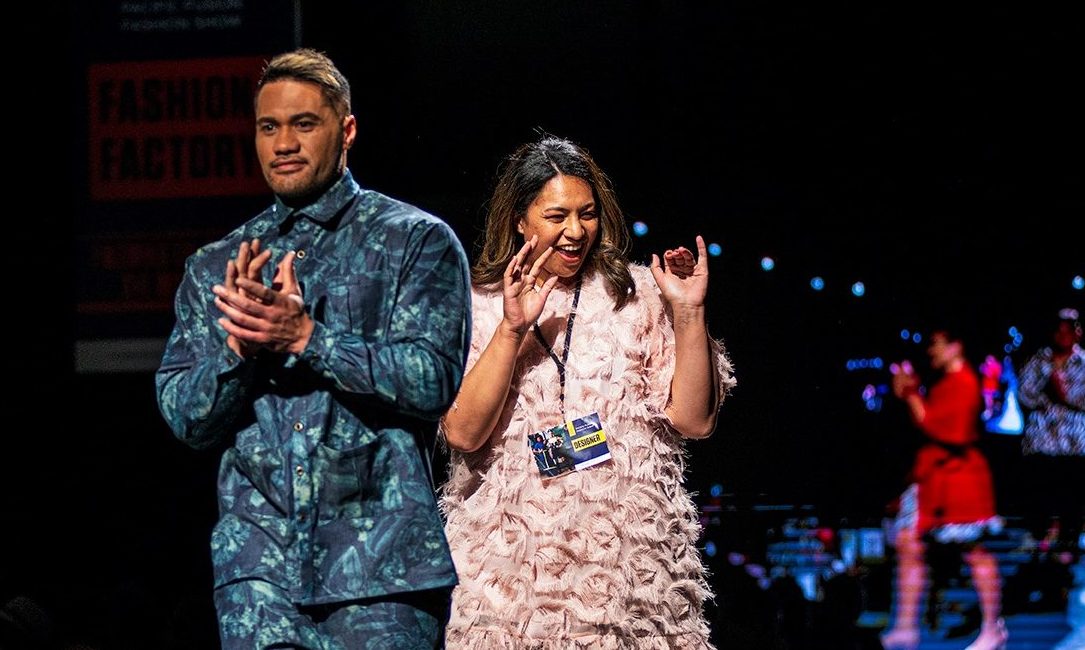 From June onwards every major fashion capital will be gearing up for another round of international fashion weeks. Milan, New York, Paris – designers from around the world will descend upon these cities showcasing their designer wares on the catwalk.

Here in New Zealand, Niuean designer Seraphina Lakatani Wood is preparing herself for the opportunity of a lifetime. Her fashion label Saint Fina has been selected to showcase at London Pacific Fashion Week (LPFW) in September later this year.

Some of her pieces featured at the LPFW teaser in February, with London fashion pundits already keen to see more.

“I am happy to say that the teaser show in the UK was a success, and I have been approached by overseas stylists who want to do future collabs,” says Wood.

Wood’s first foray on the runway was at the 2019 Pacific Fusion Fashion show (PFFS), a platform for new and established moana designers to flaunt their creativity and talent.

“[The PFFS] workshops [were] a success for everyone and made some lasting friendships with other talented designers, who are well into their own successes. It was a good space to launch, as you had the full support from everyone involved.”

A former student of Whitecliffe Fashion Tech and stay-at-home mother, Wood began fanning the flames of her designer dreams a number of years ago, taking introductory sewing classes while raising her four children.

“Fashion was always the end goal for me, and I couldn’t picture myself doing anything other than being in this industry… I was always planning, even as a stay-at-home mum,” says Wood.

And her hard work has paid off. Wood has designed many bespoke pieces for prominent Pasifika clientele, including opera singer/curve model Isabella Moore and stylist/Director of PFFS Nora Swann.

She credits her mother, Ella Lakatani, for her work ethic.

“[She] raised my brother and I… She did it on her own, like many single-parent homes out there, [working] and [studying] Early Childhood Education while trying to keep the power on in our house.  She’s hard working, and even though she refuses to retire and enjoy retirement, she just loves her job and is enthusiastic about teaching.”

As the first Niuean designer to feature at LPFW, Wood says her Niuean culture has always been the foundation of her creativity.

“That’s where I draw my inspiration from and will always.  We are very fortunate to be handed down layers and layers of ancestral techniques and designs which people pay lots to learn.”

With September looming closer, Wood has commenced work on her LPFW line, with a number of ambitious goals to boot. She hopes to open her own shop and expand the Saint Fina line into shoes, jewellery and accessories. Wood also wants to support and mentor other Pacific designers and business owners new to the industry.

“I hope to inspire other Pacifica women out there to go for those leadership roles, to be the CEO in companies and to own their own business.”