HomeArts & MusicIt's a Samoan takeover on The Voice Australia 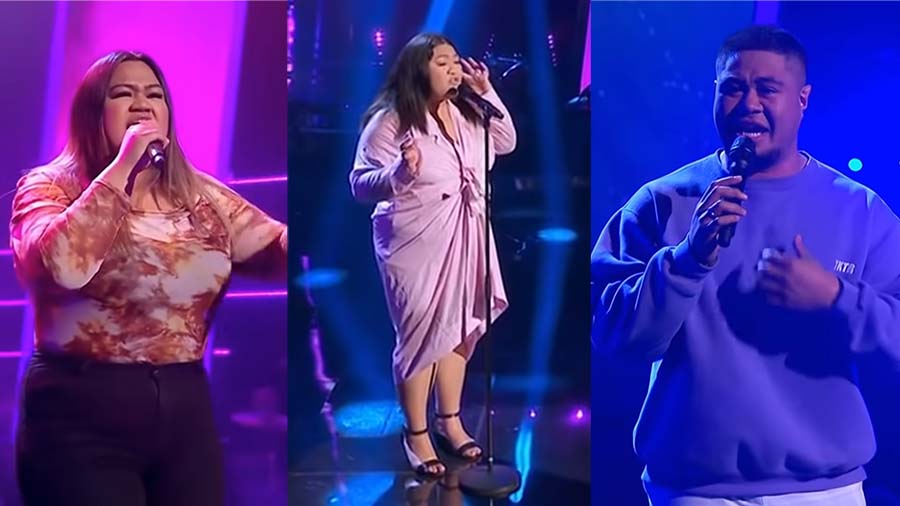 It’s one of Australia’s most popular singing competition television series, The Voice Australia, and it’s back for another show-stopping turn, with Guy Sebastian, Jessica Mauboy, Rita Ora and Keith Urban each returning to fill the coach’s chair.

This year, three Samoan singers have managed to edge out their competitors to secure coveted spots on the teams of their superstar coaches.

Twenty two-year-old Celestial Utai nabbed the attention of the judges from the very first note she belted out.

Rita Ora was also taken aback, “I can’t actually speak, that was crazy!”

“It’s really quite admirable to see a woman of your age to be able to take on such a big song,” Rita said.

Jessica Mauboy chimed in, “I don’t do this for anybody,” before taking off her heel and tossing it in Celestial’s direction. Guy also removed his sneaker and threw it onto the floor.

The trend of shoe-throwing on the show began with Oscar-winner and The Voice US Coach, Jennifer Hudson, who would fling her heels towards contestants who had nailed their auditions.

As Mauboy began her pitch for Utai to join her team, she was officially blocked from selecting her by Sebastian – much to Mauboy’s chagrin.

Utai then had the choice to join Urban, Ora or Sebastian’s team, producing a Samoan ula to gift to her coach, “this is a traditional Samoan necklace because I am Samoan,” she explained.

“But it represents respect and appreciation for the men who wear it,” she continued, ultimately opting to join Team Guy.

In return, Sebastian gifted her the silver button, Utai’s battle pass which means she was fast-tracked to the ‘Battle’ round.

Celestial faced another impressive auditionee in the Battle Rounds, 23-year-old Jordan Tavita who sang Michael Jackson’s Man In The Mirror.

Tavita also managed to turn the chairs of every coach, who all vigorously tried to court him for their teams.

“Where did the singing come from?” Ora asked him.

“My old man over there,” Tavita replied pointing at his parents who were Zooming in to his performance.

“[Dad] sings but he also plays some instruments as well.

“That’s the only place I’ve ever sung so this experience is just…if I didn’t have my family beside me I wouldn’t be here today.”

Mauboy added, “You are pure joy and this is what this show is about…just epic vocals you have. That’s a gift.”

“I couldn’t help but harmonise with you and be your background vocalist just then,” Sebastian chimed in.

“That’s when I know it’s a voice that does something inside of me, I wanna be there with you, I wanna jam!”

Coaxed by the audience, Guy, Jessica and Jordan then proceeded to have a jam session of their own, singing an impressive harmonised version of Man In The Mirror.

But the joy of that brief jam disappeared when it came time for Jordan to pick his coach.

“I just wanna say thank you so much,” Jordan started, “very grateful for you guys to turn your chairs.

Another audition which captured the hearts of the coaches and audience, was that of 24-year-old Faith Sosene.

Performing Celine Dion’s Because You Loved Me, she sang for her mother who suffers from heart disease and rheumatoid arthritis.

“My mum has shown the most sacrificial love I have ever seen in my whole life,” Sosene said as she fought back tears.

“These lyrics really embody that and so that’s why this song is really important to me.”

“We felt that,” Rita replied.

“We were honestly not even here…the passion that was in that – I’m speechless.”

“I would love to have you in my team just for that connection and that sense of complete honesty.”

Guy also chipped in, “I love the fire in a performance belly.”

“Beyond your voice being insanely good, I felt you in that performance, I felt your authenticity.”

“I love my mum, and she has done so much for me and my family. But she has been completely the rock, and she has stood strong and just undeniable and with grace, she will just seize the day,” Jessica continued.

“You singing to your mum totally took me to that place. I’m so grateful and honoured to sit here and for you to share that vulnerability… so thank you and thank your mum.”

Ultimately, Faith decided to go with Jessica and to her surprise, she was given the Battle Pass to ascend straight to the Battle Rounds.