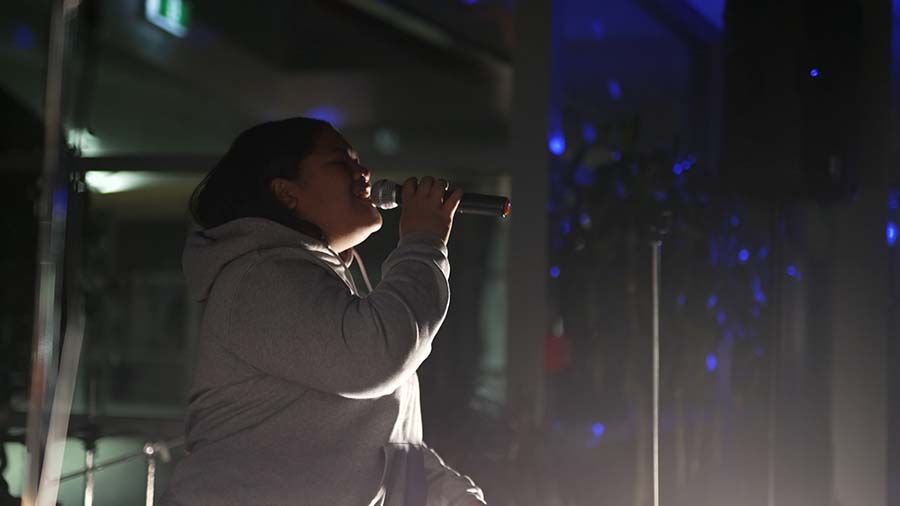 It’s the final week of New Zealand Music Month and John Pulu decided to pop along to an open mic night in Māngere to meet some local artists keen to share some tunes.

The Māngere Arts Centre is the home of Māori and Pasifika visual and performing arts in in the area. And social service agency Affirming Works – which focuses on youth development – is hosting an open mic night. It’s a chance for locals to step up and sing, perform poetry or just serenade with their musical talent.

Percival Afeaki from Affirming Works says, the event not only showcases local artists it also helps to  reconnect the South Auckland community after the many Covid-19 disruptions.

“I think all the stars aligned with NZ music month in May so this was a perfect opportunity with the theme which was level up your local talent and the theme was around just seasoned musicians with local musicians and just providing a platform,” Afeaki says.

This is a platform that’s been around since 2013 and many artists – local and international – have graced the stage over the years.

“Three Houses Down those boys have been there from the start, we’ve got King Kaps and Teremoana Rapley who have also done a lot of support behind the open mic but many artists have come through from the likes from Spawnbreezie, Teki, Swiss, Tree, Ria, Dawnraids and the whole NZ musicians especially out these ways in South Auckland they’ve turned up,” Afeaki says.

Ozarius Tu’ua has turned up to add some smooth vocals to the mix, “one thing I enjoy about music and performing is it allows me to actually be free,” he says.

“As a musician that’s a way of me expressing my emotions and basically sharing a story I love to story tell through my music, I am not a very good speaker so I think one way that I felt like it was the best way to get my story across to other people is through music.”

Artists like Elena Latoa are just starting out and this is her chance to perform in front of a live audience.

“I’ve been singing for a long time and now I wanted to take it seriously and I just thought it was time to like put myself out there even more especially because I’m 16 and so it’s like, young artists that aren’t up there, it’s a good opportunity to like get up there now and hopefully I can inspire younger artist who like to sing,” Latoa says.

Some singers use online platforms to promote their music but local gigs like this help boost the confidence of the young performers.

Saxophonist Soakai Malamala is excited about the opportunities that may come out of this event.

“An open mic like this is great, especially for up and coming musicians because  we never know who is in the crowd, you never know who is listening. This is where connections are made and these great networks are created,” Malamala says.

The jam session is the perfect opportunity for musicians to meet and collaborate.

Youth worker Vinny Niutama jumped on stage to perform some hip-hop music and he did it to motivate others to go up too.

“We just really want to encourage our young ones just to, you know, build that confidence and just to express their talents,” Niutama says.

Another rapper who joined him on stage is Graham Jackson who is encouraging others to not be afraid of giving it a go.

“The biggest thing that I wanted our young ones or anyone there to take away, like if you put yourself out there you know there’s nothing to lose, just everything is a gain really.”