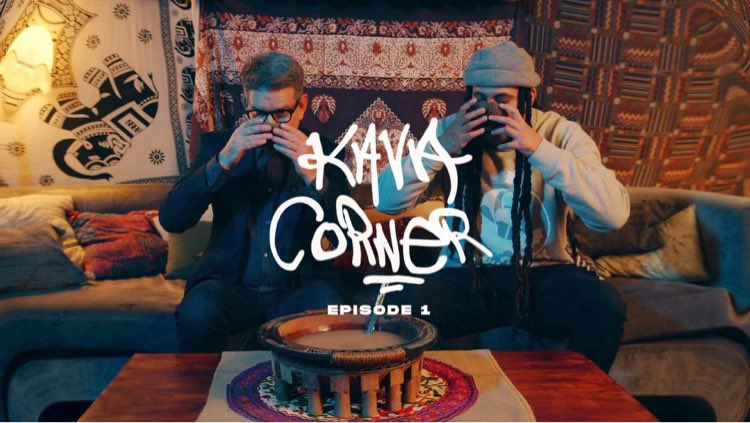 It’s a fitting premise for a show; an award-winning artist invites a variety of guests to join him in the studio for an open conversation and a few shells of freshly brewed kava.

Rapper Melodownz has done just that, launching his very own online series Kava Corner this week. For many Pasifika viewers, seeing Melo and his guests seated around the tanoa will be a welcome familiarity.

“For many years our Pacific people have been drinking and using kava / ava / Malok,” says Melodownz.

“Whether it’s used for ceremonies, Matai gatherings, Talanoas, social gatherings, health benefits or recreational use, Kava has always been a part of Pacific culture.”

And while he humbly promoted the series with one or two posts on his own social media pages, Episode 1 has already racked up over 12,000 views on Youtube.

In perhaps one of the most enjoyable and quotable (“I am off my nut on kava”) interviews he’s ever done, TV1’s Breakfast host John Campbell certainly made for compelling viewing.

“I’m quite whacked by that,” Campbell exclaims after he chugs back his first shell of kava.

“Just one?!” a surprised Melodownz asks.

“It’s cause I’ve been up for eight hours longer than you, Melo.”

It’s thoroughly entertaining seeing “the GOAT of New Zealand media” slowly succumb to the natural soporific effects of kava, but the veteran journalist also had many insights to share with the Hip Hop star.

“So it’s the same circle of people endlessly interviewing and re-interviewing each other. And so I became obsessed with…speaking to people who don’t have power.”

Campbell’s musical tastes were a revelation for many viewers, with one person commenting, “Damn, was surprised at his knowledge of hiphop”.

Campbell explained, “I listen to music that tells me stuff I didn’t already know, which is a lot of Hip Hop.”

“Because it’s not my lived experience and I’m constantly struck by the innovation, by the politics, by the imagination…and I love it….that’s the music I probably listen to most often.”

“I know it’s a cliche’ for a certain type of white, middle class guy to like Public Enemy, but there was something there that just stopped me in my tracks.” (10:13 into the interview is when Campbell rattles off a few lines from Fight the Power).

Many of us are accustomed to seeing and hearing Melodownz the performer, but the rap artist is equally wonderful in his role of interviewer. He offers a relaxed and fun atmosphere while still managing to deliver an interesting and entertaining interview. Kava Corner demonstrates the potential Melodownz holds outside of the music world.

If the first episode is anything to go by, Kava Corner could very well become New Zealand’s own Hot Ones, and we are patiently anticipating the next episode.