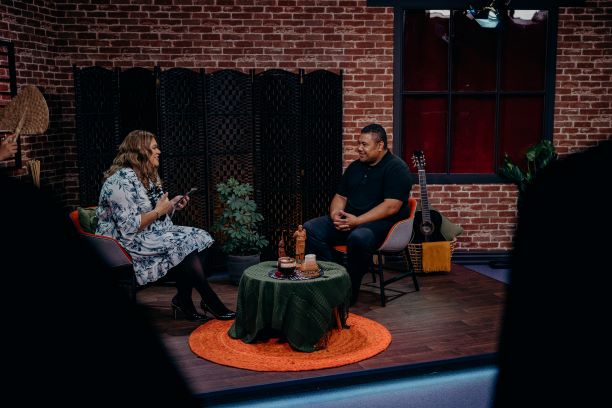 If you’re not familiar with the name TJ Taotua, chances are you’ve probably already heard his heavenly vocals. Together with his band Ministry of Tone, Taotua has earnt his stripes on the gigging scene, performing at Soul and R&B concerts, public events and, of course, weddings.

“I heard you wrote this song [Faith Hope & Love] cos you’re the Pacific’s answer to the wedding singer,” teases host Sara-Jane to Taotua, the featured guest in Soul Sessions Episode 2.

“And then also, what is the vehicle to deliver the song? I’m always doing weddings, and it’s a special day for couples, and so I thought, I’m singing everyone else’s songs. Why not create a song that’s meaningful to couples as well?”

Taotua has found much success with his Gospel music, winning multiple Pacific Music Awards over the years including two PMAs for his EP Magnified. “For my first offering of an EP, it was the first body of work that I put out, and I wanted to honour God with that,” Taotua says.

“But [my] passion has always been R&B and Soul, and I’ve got a few tracks that we’ll be dropping over the coming months.”

These releases are a pre-cursor to the Soul/R&B album Taotua is set to release later this year. That’s good news for Taotua fans, who’ve been patiently waiting for a body of work they can sink their teeth into.

Rounding out the episode is an ending duet of Taotua’s award-winning single Magnify. The performance not only demonstrates the amazing vocal abilities of Sara-Jane and Taotua, but also reveals the incredible extent of TJ’s lyrical and composing ability. No wonder he’s won all those awards.

Taotua is, and always has been, great interviewing talent. During my radio stint at Niu FM, Taotua was one of the many Pasifika celebrities who became a staple in the studio to promote his incredible music. Flawless vocals, effortless guitar-playing and charisma in spades; it always struck me that for someone who was undeniably gifted in music, Taotua was also equally humble.

It was a real honour to then be asked by the man himself if my co-host and I could feature in the music video for Faith, Hope & Love. Taotua and his film crew were generous and patient with us – even when we didn’t feel too confident to be on camera.

It was nice to be reminded of this experience in this episode of Soul Sessions and to hear exactly why Taotua is a musical force to be reckoned with. We (im)patiently await the day of his album release!

Check out the latest episode of Soul Sessions here.