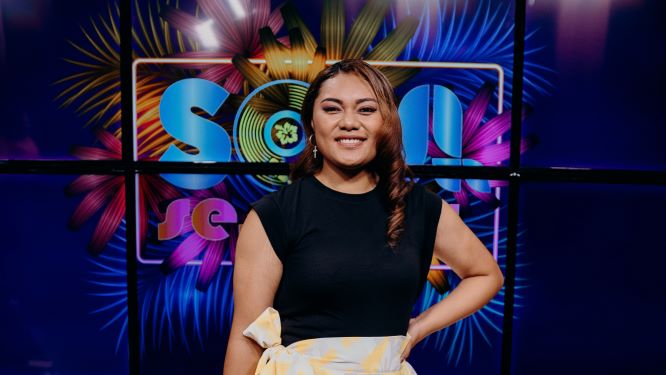 The Quickfire Faith Questions are what all the guests will face for their Soul Sessions appearance, a list of Gospel inspired questions that usually give a bit more insight to the people sitting in the hot seat.

“If you could be any biblical character who would it be and why?” Soul Sessions host Sara-Jane asks up-and-coming singer/songwriter Silika Isaia.

After some consideration, Silika answers “David.”

“I like how he defeated Goliath… He was a young kid, and everyone doubted him, but he truly showed up with the power of God,” she elaborates.

It says a lot about Silika, who in the past has won multiple singing competitions and performed with Kiwi legend Dave Dobbyn. That’s some pretty major goals to slay while still in high school.

Many of Silika’s fans were first introduced to her incredible singing prowess when she performed her Mad Men original on RNZ, which racked up over 300,000 views. Being 17 at time, Silika tells Sara-Jane it all felt “unexpected”.

“We just went in for a humble interview, humble live performance as well. Didn’t think much of it, as you can tell by my messy hair and untouched face,” Silika jokes.

“But the lyrics of the song really seemed to captivate such a big audience.”

The song itself came to Silika as she was playing around on her keyboard and watching television one evening. “I went to look at the TV and it came up with the headline saying Trump was taking refugee children away from their parents,” she remembers.

“I just thought, ‘Why not give these kids a voice?'”

Deeply passionate about music and singing, Silika has continued to hone and develop her remarkable talent. These days you can find Silika in The University of Auckland’s music department, studying a Bachelor of Music, majoring in Pop music. And earlier this year, Silika was selected to open for the Kiwi band responsible for our summer earworms, L.A.B.

“Silika – I’ve heard some amazing things. I saw some stuff on RNZ of her singing – she sounds beautiful.”

High praise from one of the most notable vocalists in the country. With so much achieved at such a young age, it’s clear this David has many more Goliaths to slay.

Word on the street: Samoa gears up for the 2021 elections

LIVE: Pasifika Festival back in new location after two years