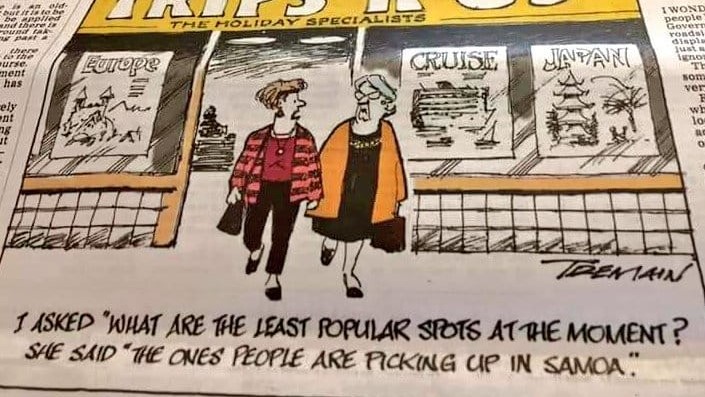 The Otago Daily Times is under fire after an offensive cartoon was published in today’s paper making light of Samoa’s ongoing measles epidemic. The distasteful joke reads, I asked, “What are the least popular spots at the moment?” She said “The ones people are picking up in Samoa,” accompanied by an illustration of two women walking out of a travel agency.

ODT’s Facebook page has been flooded with angry posts from the Pacific community, calling out the paper for the bad taste cartoon. “Is this the kind of publishing the ODT supports? Creating humor out of the suffering of a country that deserves and needs only love and support at this time?” writes one person.

“Disgusting! How was this approved for printing?’ another person asks.

Others are asking for an apology. “You got it horribly wrong, and there must be accountability!”

Media personalities have also weighed in, John Campbell calling the cartoon “a shameful assault on the cartoonist’s art – and on empathy, decency, human feeling, and the people of a country with which we’re so close.”

This is terrible, ODT. What a shameful assault on the cartoonist’s art – and on empathy, decency, human feeling, and the people of a country with which we’re so close. As Sita says, most of the 55 lives lost have been under 5. Who would draw this? Who would publish this? And why? https://t.co/zO0YCnWqwQ

To date, 55 measles related deaths in Samoa have been recorded, with two fatalities in the last 24 hours.

This afternoon Otago Daily Times wrote a brief apology on their website:

“Today the Otago Daily Times published a cartoon making reference to the measles crisis in Samoa.
The content and timing of the cartoon was insensitive and we apologise for publishing it.”

“Today the Otago Daily Times published a cartoon making reference to the measles crisis in Samoa.
The content and the timing of the cartoon were insensitive, and we apologise without reservation for publishing it.
We have published many stories about the human suffering caused by the outbreak. They are stories not about a virus, they are stories of real people, real hurt, and real tragedy.
This should have been our starting point when considering publishing the cartoon. That it was not was a deeply regrettable error in judgement.
We will review our selection process. It must be robust. Our community expects no less.
Barry Stewart, editor”