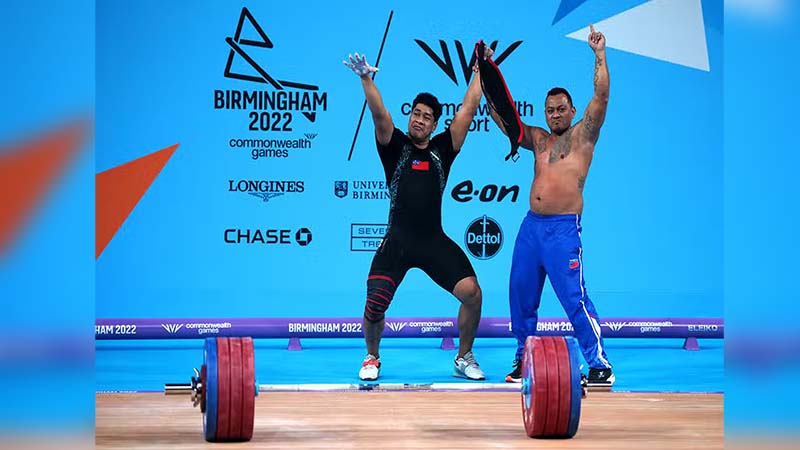 The 23yr old local lifter breezed through the 96kg Men’s category, with a total lift of 381kgs. Opeloge made a 171kg snatch and a whopping 210kgs in the clean and jerk, also setting three new Commonwealth Games records.

The young lifter made his way into this year’s competition as a favourite to win gold after his various accolades in the sport over the past three years.

Opeloge had previously won silver at the 2018 Commonwealth Games in Australia, making this win for him extra sweet.

The Opeloge family has become a household name in Samoan and Pacific weightlifting in the past ten years. 10 of the 12 Opeloge siblings, including Don, have all represented Samoa on the international stage for weightlifting.

The most notable of them would be Ele Opeloge, who made history in 2008 winning Samoa’s first medal in the Olympics with bronze.

Opeloge’s gold medal now brings Samoa’s medal tally to 2, both of them achieved in weightlifting. With a couple more lifters yet to compete including Don’s brother Jack Opeloge, there are still more medals and achievements to be made by the team.

The Pacific dominance in weightlifting did not stop there, as Fijian lifter Taniela Rainibogi picked up bronze in the same category. Rainibogi totalled an impressive lift of 343kgs, only 3kgs behind silver medallist Vikas Thakur.

Maximina Uepa picked up a bronze medal for Nauru in the Women’s 76 kg category lifting 96kgs in the snatch and 119kg in the clean and jerk. Uepa’s bronze medal is also Nauru’s first medal for the games.