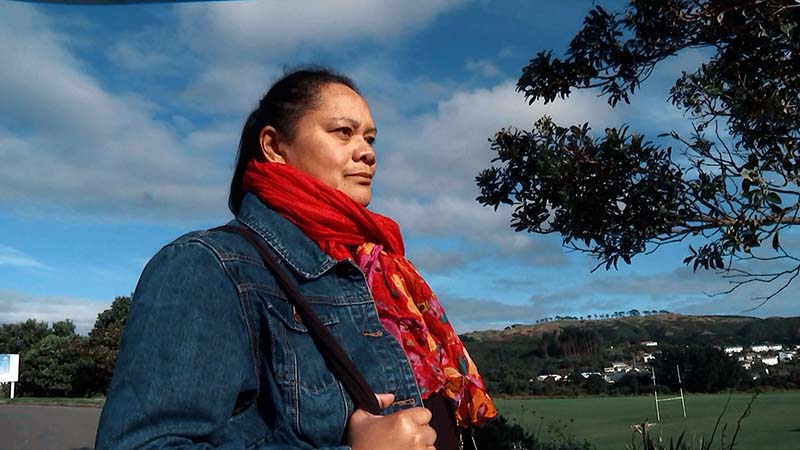 Maria Samuela has been writing stories for children since the 1990’s. This year, her first book for older readers, Beats of the Pa’u, was published by leading New Zealand publisher, Te Herenga Waka University Press.

Formerly known as Victoria University Press, it’s the publisher behind award-winning poet Tusiata Avia, and Man Booker winner Eleanor Catton. “I think we’re finally seeing more Pacific writing come out, and it’s great to be a part of it,” Maria says, “But it has taken such a long time.”

Maria remembers having great expectations when Sia Figel’s book, ‘Where Once We Belonged’, came out when she was at University in the 1990s.  “It was a big deal. I thought Pacific writing is finally going to see it stay and start taking off. And it hasn’t really taken off in the way that I thought it would.” Noting that was thirty years ago, she shakes her head.

‘Beat’s of the Pa’u’ is set in the 1970’s and 1980’s, in Cannons Creek, Porirua. It memorialises the time, place and community of Maria’s childhood.

In his review of ‘Beats of the Pa’u’ for Newsroom, New Zealand poet laureate David Eggleton writes, “What gives Samuela’s writing its extraordinary power is that she doesn’t flinch from sharp, clear-eyed observations and wry depictions of truths, both pleasant and unpleasant, about a particular neighbourhood, using language articulated with an insider’s precision and radar-like ear.”

Power and truthfulness are qualities Maria was struck by when she encountered the book ‘Son’s for the Return home’ by world renowned Samoan novelist Albert Wendt as a sixth form student at Porirua College. “I remember reading it for the first time at 16, and thinking how honest the writing felt. I just felt empowered that we could tell our stories in such a way. In such an honest, powerful way. Even just seeing Albert Wendt’s photo on the back cover of the book,” she says, “was really empowering to me.” She smiles, remembering, “I thought, ‘Wow, maybe I can do that too.’”

It was a turning point for Maria, and made the idea of becoming a writer real. “Back in the ’80s. I was a Pacific Island kid growing up in Porirua. Being a writer wasn’t something that I thought was realistic. My mom was a cleaner. My dad worked in the freezing works, I didn’t see other Pacific writers. And I didn’t read a lot of Pacific stories. I can’t think of any stories that I had read before I discovered ‘Sons for the Return Home.’”

Although there was a lack of pacific stories and writers, Maria’s love of reading was seen and nurtured by her family. “My mother made sure that I had books to read. So I read all kinds of books. Obviously Bible stories, because my parents were very religious. But fairy tales, my mother read to me. I think she just saw something in me, and I think I owe a lot to her in terms of me becoming a writer and a reader. Or a reader first and then a writer.”

Then, in 2016, at the funeral of her older brother Steve, who was a teacher, there was another moment of inspiration. “At the start of the funeral, they did a big haka for us and Steve. And I remember just being surrounded by all these young Maori and Pacific students doing the haka. And I remember thinking, ‘those are the people I really want to reach with my writing.’”

The next year Maria was accepted onto the creative writing masters at Te Herenga Waka—Victoria University of Wellington’s International Institute of Modern Letters (IIML). She wrote the first draft of ‘Beat’s of the Pa’u’ that year.

The book is dedicated to her three late brothers, Steve and Harry, both teachers, and Tau, who grew up in the Cook Islands before joining the family in Cannons Creek. There’s an interaction in the opening story that draws on Tau’s experience of coming to the family home for the first time. The rest, Maria says, is fiction. Yet its fiction that is praised for its honesty.

I asked Maria if she had any reservations about writing this way, given the continuing problem of negative stereotypes of pacific and Māori people in New Zealand. “My priority was just to try to write as honestly as I can,” she says.  “And just let the characters be who they are. And actually I think showing a character’s flaws is what makes them interesting, it’s what makes them human.”

She takes a second to reflect and adds, “maybe that’s why it’s taken me so long to write this book. Because that is something that I had considered; how other people were going to react to my stories and characters if I wrote them in a certain way. I think, especially as Pacific writers, we’re seen as representing a whole group of people, and that’s unfair because there are so many different kinds of Pacific Islanders. So many different kinds of Pacific stories, and experiences.”

For Maria, although this pressure may have added time to the writing, there was only one possible outcome. “I would say, what got me over that, is just being honest to the story, it’s about the story. It’s not about you.”

Maria’s next project is an historical novel about Cook Island women who migrated to Aotearoa.

“That triggered the idea for the book, because my mom died when I was 19. I never talked to her about what her life was like as a young woman. I’ve always been curious about that. And so this book is my way of discovering what her life might have been like when she was young.”